Over four years ago I made an Easy Linen Shirt for Mathias: It was too big on him at the time but he has worn it extremely frequently over the last year. But he’s grown so I thought it about time that I made him another. Last year I bought a pair of size 20 linen trousers from the charity shop, they were in excellent condition and perfect for turning in to something else! A while ago I got them out and having traced the shirt I fiddled around trying to work out if I had enough fabric, I decided to leave it for a while until I had more time and headspace.

Fast forward to last week and I worked out that I needed to unpick the inside leg seams first to work out quantities. I had to cut the back panel on the seam of one of the legs to make all the pattern pieces fit. Once I’d done cutting the sewing together was pretty quick, although I did struggle with getting the collar to fit on to the shirt but with a bit of persuasion it went on.

I finished it and asked Mathias to try it on, this was his delighted reaction: 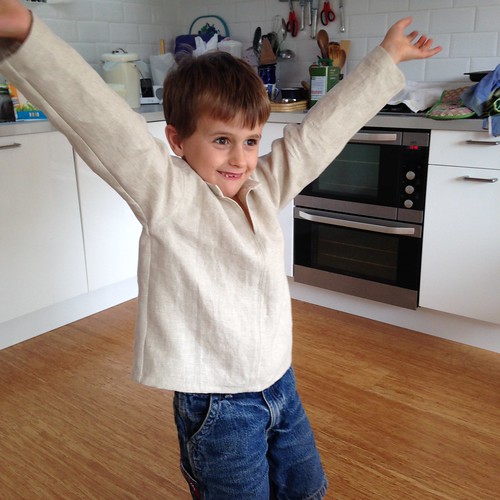 There was a fair amount of jumping around and the shirt has been worn every day since (lets face it clean clothes are highly overrated), but the addition of bilberry juice while out on Dartmoor yesterday led him to decide to put it in the wash. 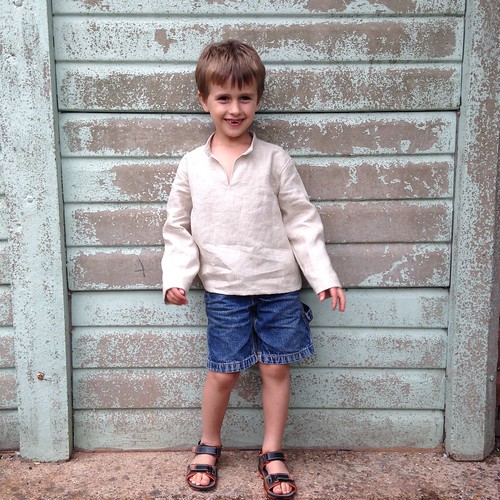 It’s a way better fit on him than the other one which has been washed and consigned to the ‘hand me down’ pile. In theory this should have gone on my FAL list for this quarter but I forgot (or was ignoring) it, I don’t care because it’s made and he’s delighted.

One Reply to “Years later…”