Earlier this year Tobit’s brother got married; I’d known about the event for 6 months or so and had been pondering the idea of making them a quilt for a wedding gift.  This time last year we had a whole lot of other stuff going on that meant the idea got shelved for a while.

Fast forward to December 2015 and I eventually got around to pitching the idea to them.  Nathan came up with a this as a brief: ‘Glastonbury \ Coachella festival  \ music, Sunset and coastal colours, Australia \ west coast America.  I loved that they had an idea but I had no idea how I might translate it.  The wedding was in April, we didn’t make the trip halfway around the world to San Diego but about that time I had the inspiration of the Groove quilt. 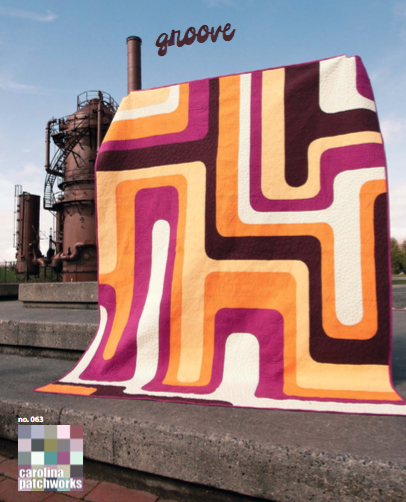 So I purchased the pattern and Tobit made fabric choices and soon I was on a roll cutting and sewing: 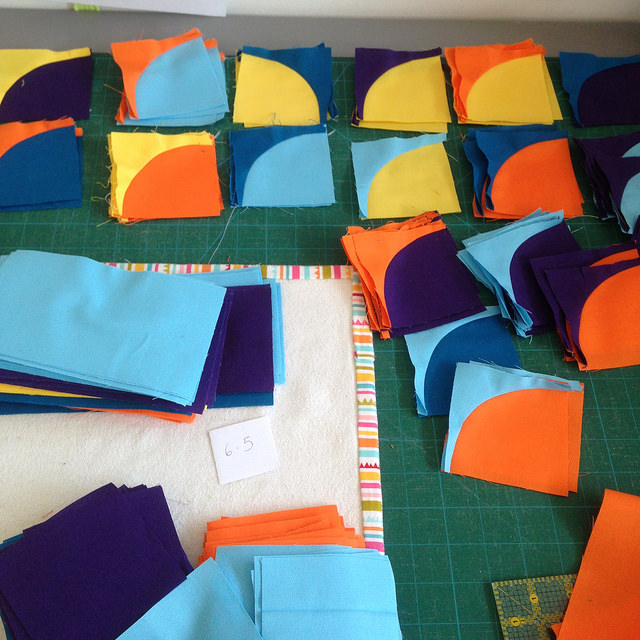 It didn’t take long really to make the quilt top: 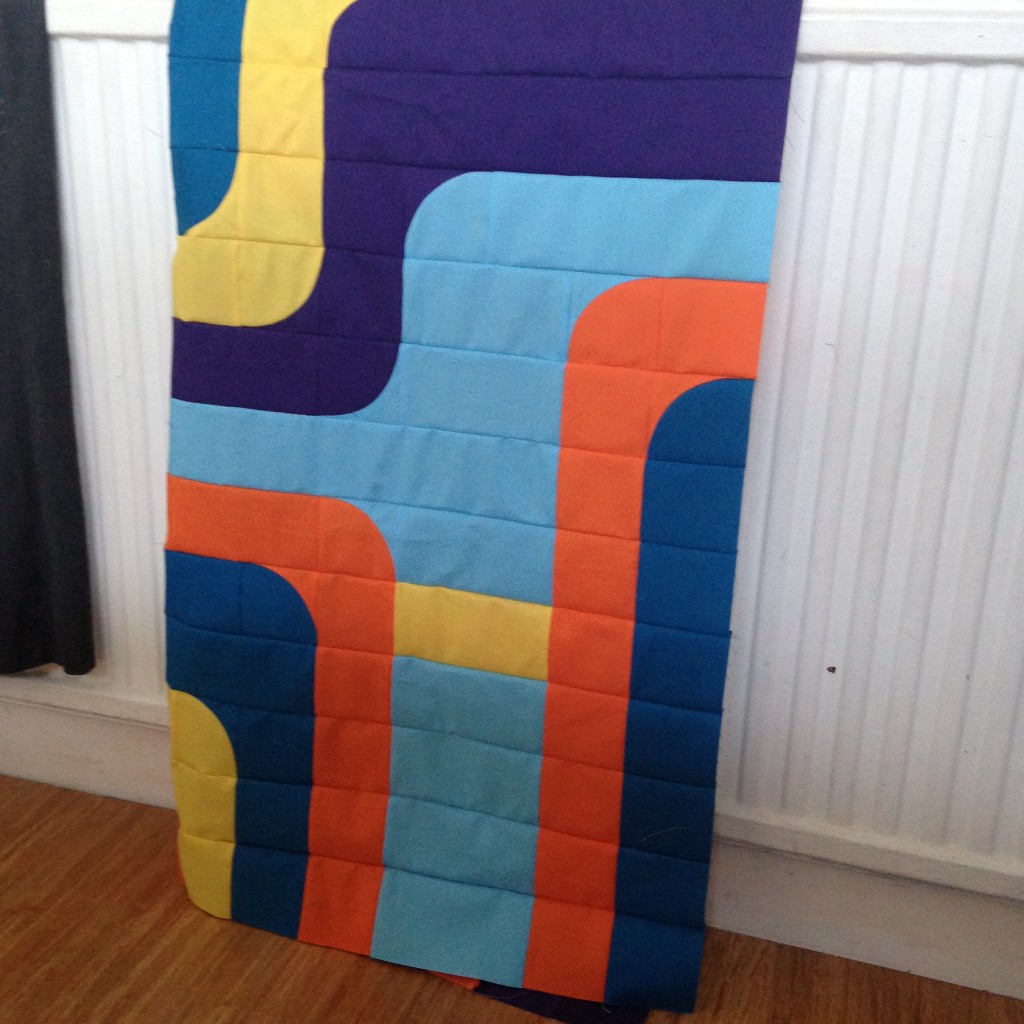 I spotted the error and fixed it, then I folded the top up and put it in the cupboard and searched for a suitable backing fabric.  I struggled to find anything that I thought would be suitable; Brexit had happened and the cost of buying fabric from the US was too expensive.  At the Festival of Quilts in August I eventually made a decision and bought this Whistler Studios style #39513 for Windham Fabrics, 108″ wide. 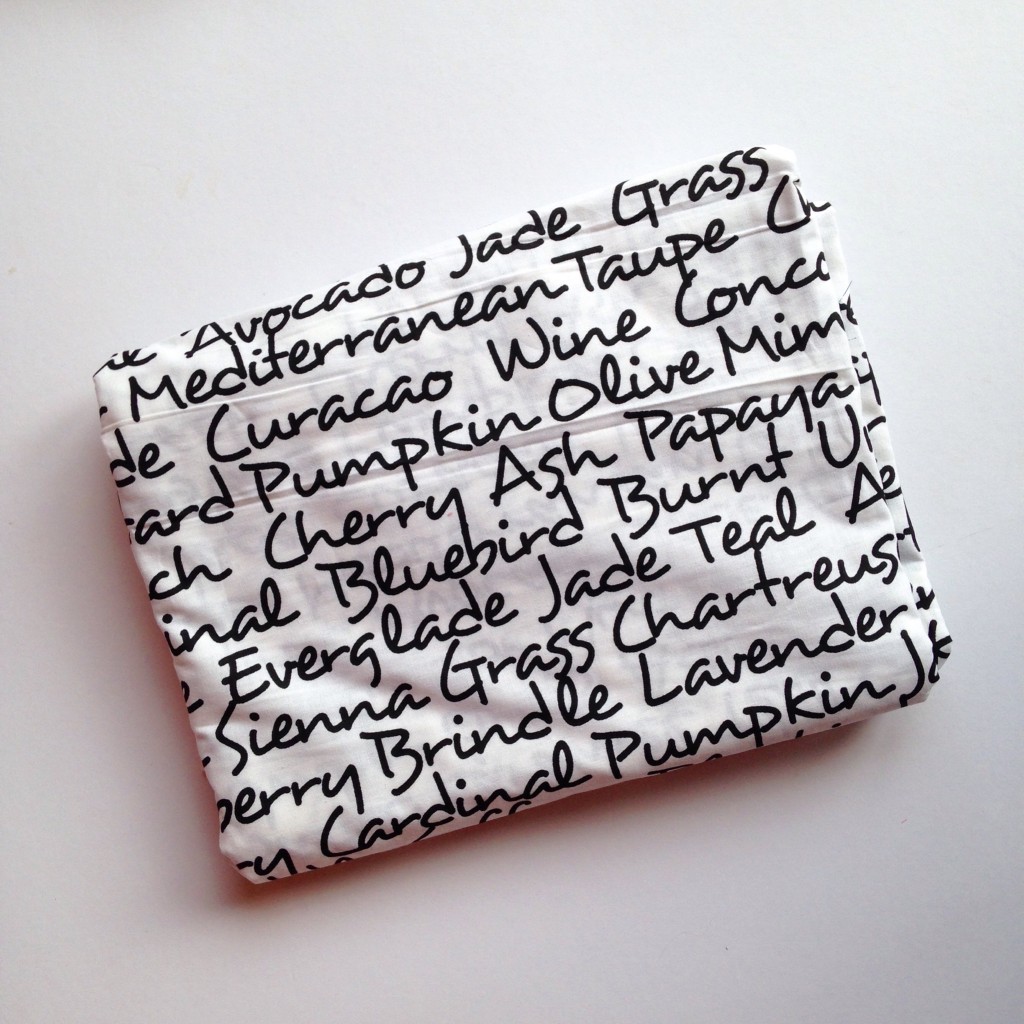 The quilt top stayed in the cupboard; the return to school for the children and my eldest starting hight school I couldn’t find the mental energy and space to deal with it.  I did have a vague idea of how I might quilt it so ordered matching Aurifil colours. 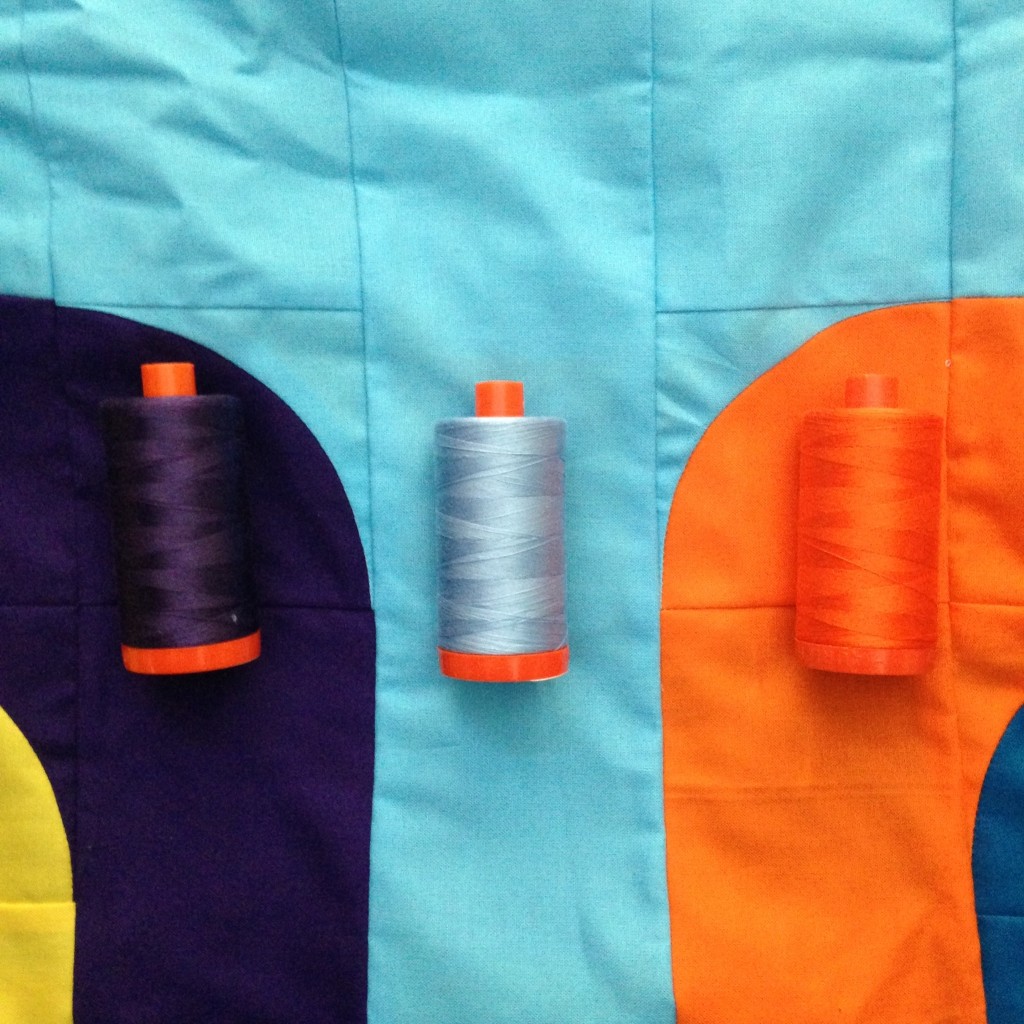 Although ordered from one online store they didn’t arrive together so I had to wait for them all to arrive. 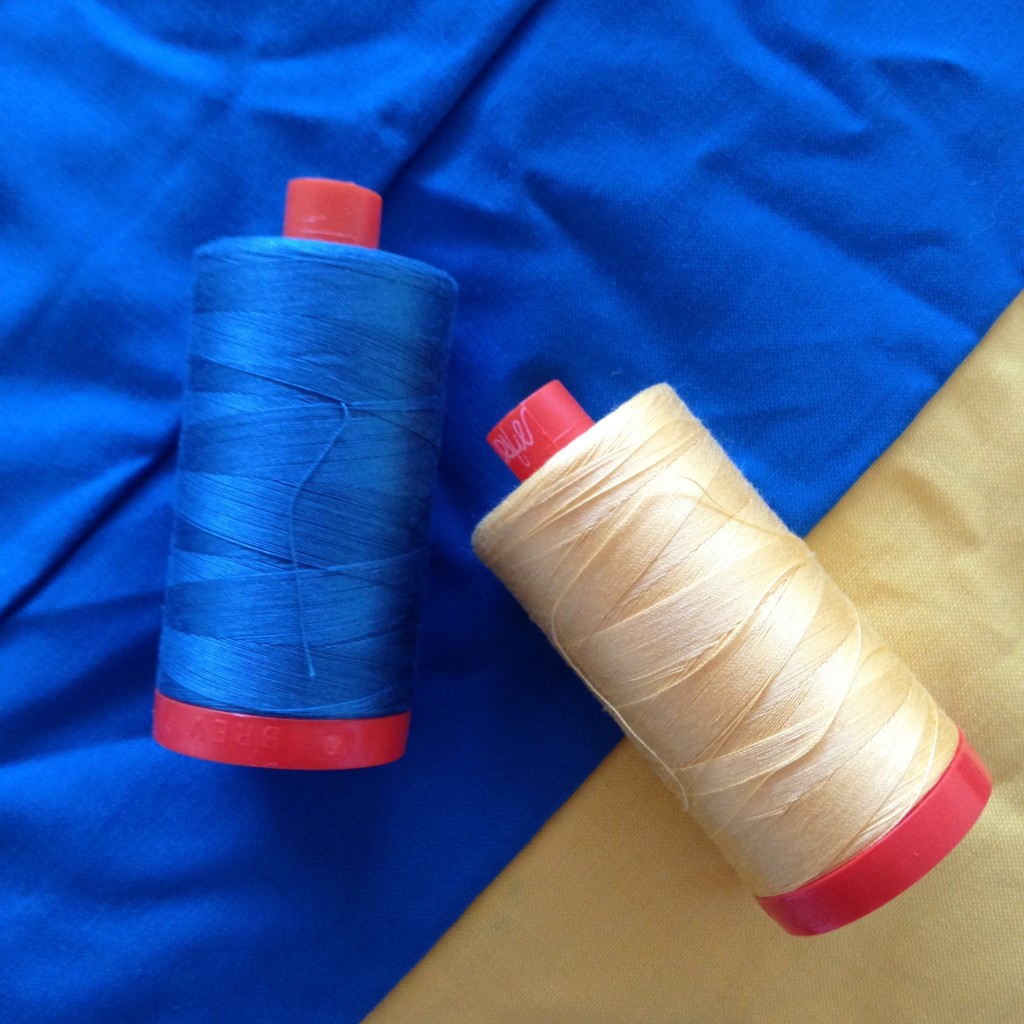 I got it in to my head that I could tackle it at half term as I also had time off work.  At the weekend I basted while Tobit devised a quilting plan: 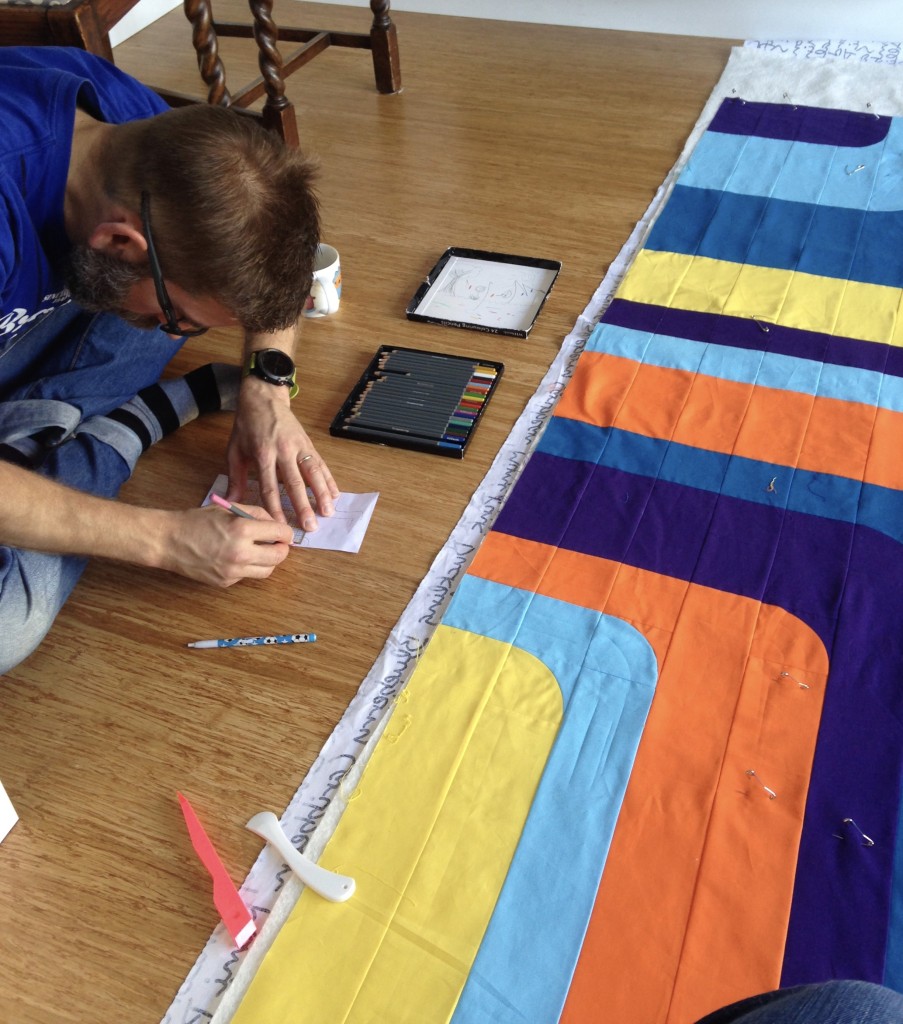 And then a number of hours quilting; I’m not sure how to explain how I quilted… 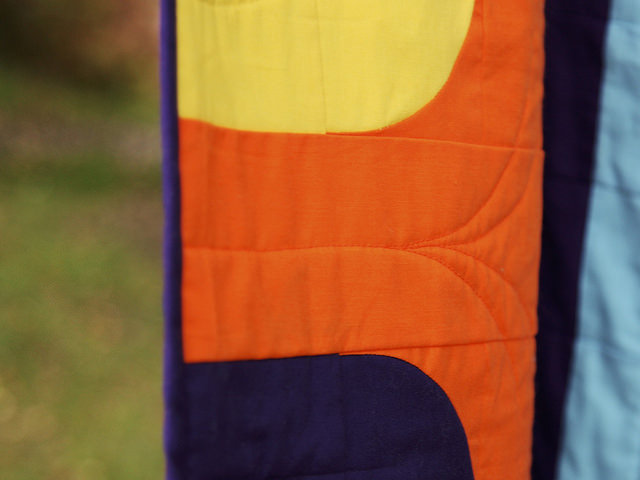 But the quilting echoes the curves and the lines converge where the curve gets thinner!

Once the quilting was finished I trimmed the edges and curved the corners to echo the curves in the quilt. 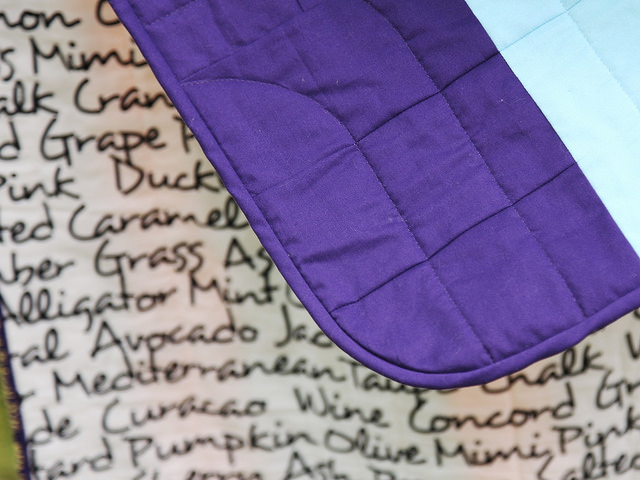 I wanted to label the quilt but wanted something that subtle so I ended up using the alphabet function on my machine and stitched on the binding: 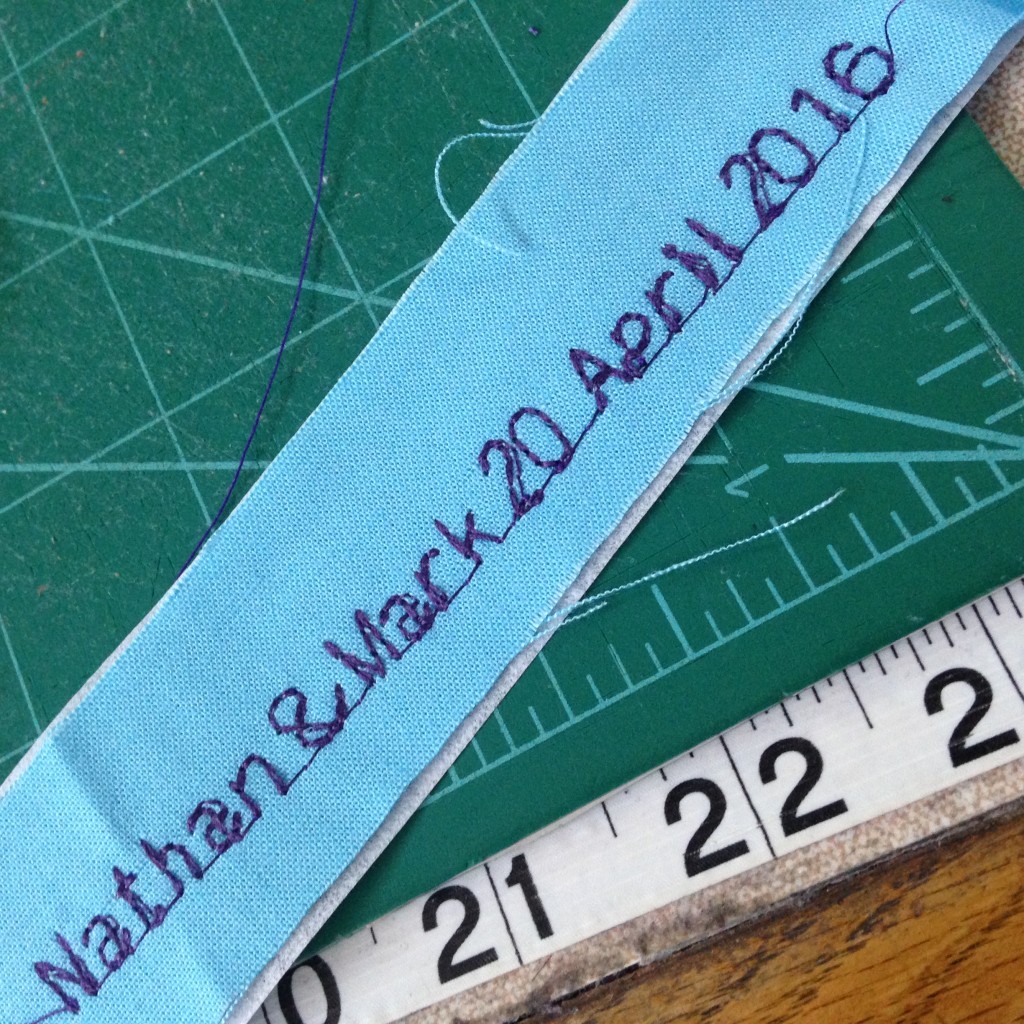 This is the only photo I have of it; it continues with our names, I’m guessing it wasn’t on Tobit’s radar when he was photographing the finished quilt but it appears on the binding on the back of the quilt.

A few quiet hours hand stitching the binding down and a while burying threads (my least favourite part) and the quilt was finished.

As it was half term we had time to spend a day out on Dartmoor and took the quilt along for a photo shoot: 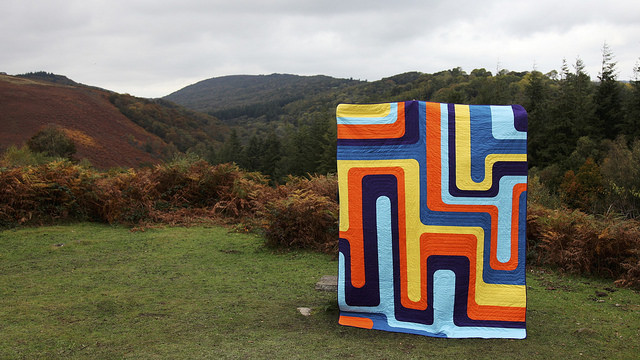 It’s a big quilt; Bethan and I stood on a bench and stretched our arms to hold it up and it still touched the ground! 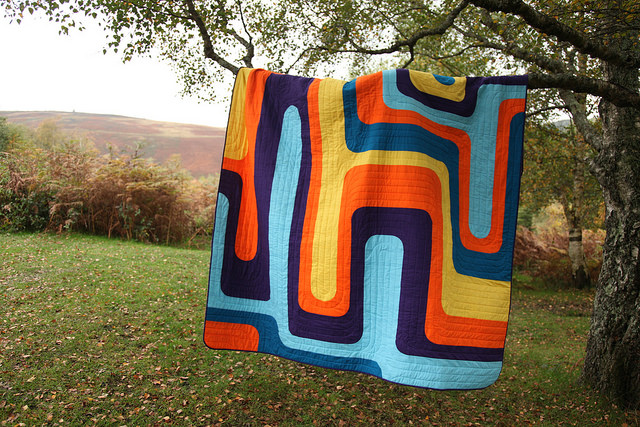 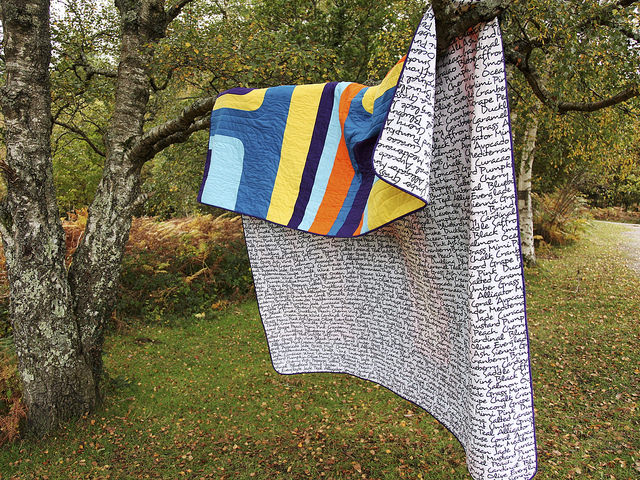 This was most definitely on my 4th quarter FAL list I am so pleased to have it finished and gifted.