In between birthday celebrations I’ve been trying to come up with some new products, I’m having a stall at the school fete in a couple of weeks and have been thinking about what I might want to sell.

I saw some journal/notebook covers over on Gingercake’s blog a while ago and thought I’d have a go at making some, you can find the pattern here. This is officially called ‘The List Book’, we write in it all the things we need/want to do, it’s a bit scary looking back through it (it goes back a number of years) but it is also really satisfying crossing things off when they are done.  Anyway it now has a cover, it’s just a hardback A5 notebook but now it looks quite funky and we might be more inclined to get some jobs done (and be able to find the book when we are looking for it).

I had another book that needed brightening up.  I also have a bag full of selvedges which I’ve been keen to use.  So one evening I got out some thin sheeting and stitched the selvedges overlapping each other onto the sheeting.  I then cut out the right size pieces for the cover and made one for one of my sewing notebooks. I’m really pleased with it especially as it seems to be in keeping with it being a sewing notebook!  So I’ll be making a few more of these over the next week or so, the hard part is choosing the fabrics, I’m thinking that I might make up some patchwork ones.  What would you choose? 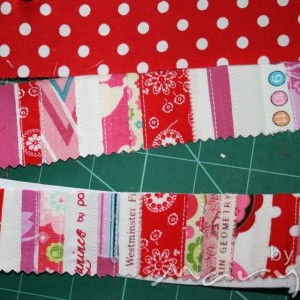 They weren’t very big but they would do for something, rather than my usual trick of putting them away for another day I made a few of these: 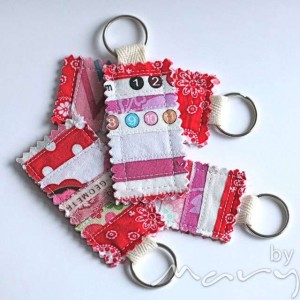 Keyrings prove to be quite popular at fairs so hopefully these will appeal to someone!

Next I’ll tell you about the quite fabulous Contemporary Craft Fair that was on this weekend.