I feel like I’ve had a productive week, I’ve finished 5 travel car wallets, one is already on it’s way to Germany as a present for my nephew; 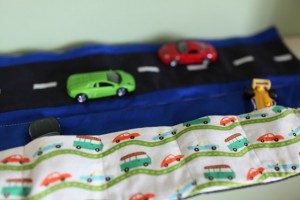 I been using the lovely fabrics from Riley Blake that I bought in the summer for the pockets and appliqué on the exterior.  The exterior is upcycled denim, Tobi had a clearout in his wardrobes and donated a few pairs of jeans that he no longer wears.  Some of them had been worn for decorating so a few of the wallets have paint splatters on them, it just adds a vintage, upcycled feel to them! 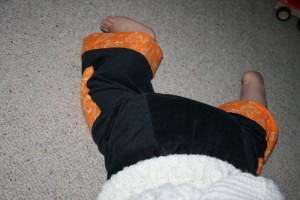 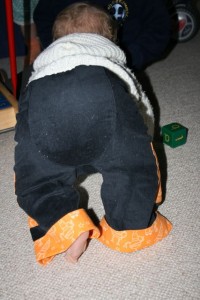 These are made from corduroy, the turn-ups and patch pockets are Robots by David Walker for Freespirit.  I’m so pleased with how they turned out that he wore them the next day, then straight into the wash and then on again today!  They feel a bit warmer than his other pair, need to find some more cord and make a few more pairs.

and I made 25 pony tail bands (picture to follow, although some of them have been taken home by visiting nieces), pretty good really especially considering that my two little ones had vaccinations this week and have been quite poorly and grumpy since and we’ve had someone working in the house building cupboards so there has been little time or space to sew.  However that is really exciting as I should soon have some storage space for all my fabric and sewing kit.

I also spent an evening making plans for the next few weeks, I’ve been booked to have stalls at two Christmas fairs and there is a possibility of 2 or 3 more so I need to get on and get cutting and sewing sooner rather than later, otherwise I’ll not have much to sell!