It’s been a while since I’ve posted, so I hope you had a good Christmas.  We had a lovely time, just me, Tobi and the children.  I had made a number of gifts for family and B was delighted with her new backpack and matching purse, she wears it a lot, even just around the house.  On Boxing day she said ‘I can’t wait to go out wearing my bag in real life’, it has been with her most places this week.  So that has brought me much happiness, there is sometimes an element of doubt when I make something for them that they won’t like it or care, but this was definitely a hit with her. 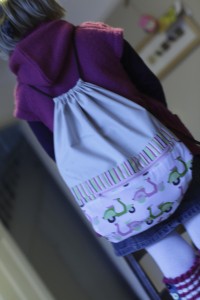 L has had a bag too but doesn’t seem quite so interested, that might be because she also had a lunchbag which she is very excited about because in the new term she will be staying for lunch at preschool!

Although it has been holidays I’ve still been busy.  A friend asked me to make a superhero cape for her sons friend who has a birthday tomorrow, she asked me a while ago and I thought that’s fine I’ll do that after Christmas… realising yesterday that I had to make it by today!  Fortunately I had bought the fabric I needed so it was just  a question of getting on with it.  So watch out there may be another superhero flying the skies near you soon!  These capes are very versatile and I spotted one worn by a wise man/king/magi in the preschool Christmas performance! 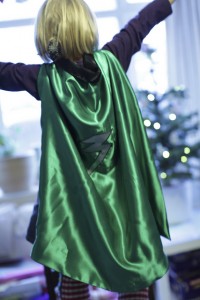 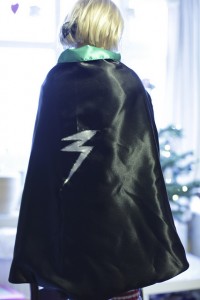 Then, last night Tobi said he wanted to take a birthday present to a friend whose birthday is today and he was planning on meeting up this evening so could I please make a present!  Nothing like leaving something to the last minute.  Anyway he chose the fabrics and I spent this afternoon sewing.  Often when sewing little projects I decided that there wasn’t much point in making just one so I made a few. 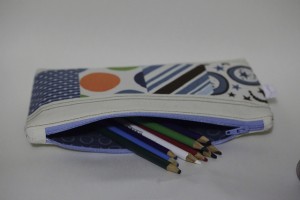 Click on the Project Photo’s on the right hand side to see picture’s of today’s other creations.