I didn’t sleep well last night but I do feel better today than I did yesterday so that has got to be a good thing.  On Friday’s my youngest 2 are at home and we almost always go to Milkshake (our toddler group) that generally means that they’ve had a good dose of fun – so much so that Mathias normally has to go for a sleep halfway through!  By the time we get home and have lunch we have a couple of hours before we have to go out again to school.  So they were content to play and I had a chance to press and sew the waistbands AND insert the elastic!

I tried one pair of trousers on Mathias (ironically he was wearing a disposable nappy as we were waiting for the washables to dry) and discovered that the pockets that I had placed on the sides were more on his knees as knee patches than pockets, so the task of removing those started!  One removed and stitched on in what I hoped was a more suitable place and tried on the boy!  Yay much better but difficult to tell with such a skinny bottom – he and his papa had fun putting things in the pockets, I can see them being ripped off if he’s not careful!  Shoving things in that really don’t fit!

Front of the first pair, one pocket looks higher than the other, I’m positive that’s because of the way they are hanging! 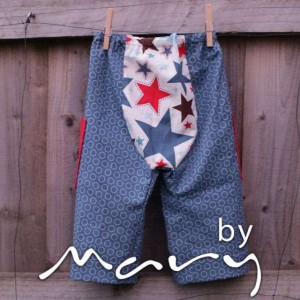 I really, really like this pair, the fabric is from the All Star range by My Minds Eye for Riley Blake.

This next photo is a shot especially for those of you who have had a go at this pattern and had problems (like me) with puckering around the big butt patch!  Rae wrote a post on how to deal with the trickiness and it works for me!  Look no pucker! 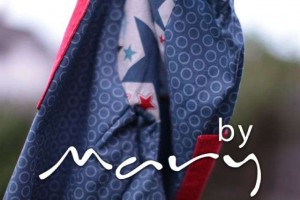 For this next pair I wanted to use some of the collection of Wheels fabric by My Minds Eye for Riley Blake, but only have fat quarters so not enough for a pair of pants, also I didn’t want to buy any more fabric for this so I used some cotton sheeting (that I just happened to have) for the main fabric.

So pockets with road signs on: 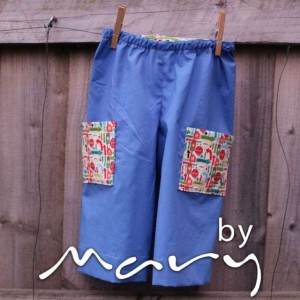 And a butt with vehicles driving across! 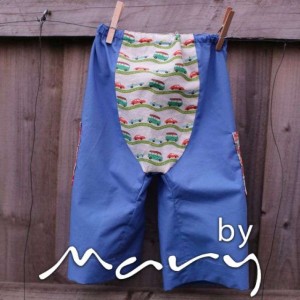 They are pretty light and I’m hoping will be great for the summer!

There ends day 5 of Kids Clothing Week Challenge and I feel like I’ve been challenged!  I was going to say that I have completed my list but I’ve just checked it and I see on it that I wrote that I would appliqué the girls a t-shirt each, both have been started but not finished so I’ll see what time I can find over the weekend!