Following on from my last post of a few photo’s of a finished quilt, excitingly there was no rain this morning so I took the opportunity to get the quilt out on the washing line and photographed in full: 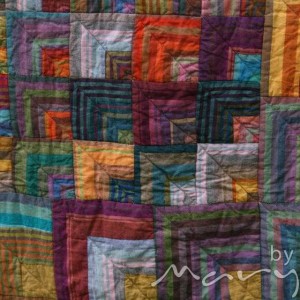 I love how the washing and drying process gives this crinkled, aged effect. 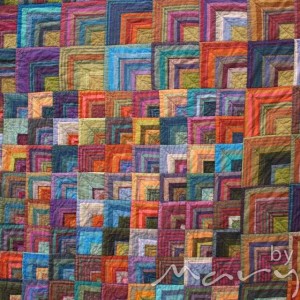 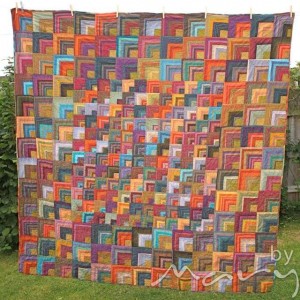 I love this picture, after working so closely on something bit by bit for a long time it is great to be able to step back and see the whole thing. 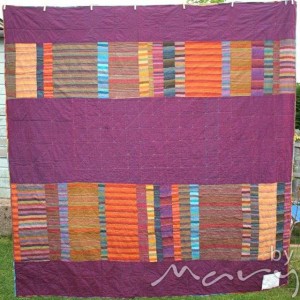 Cutting started: no idea, I definitely remember doing quite a lot the summer I was pregnant with Mathias, so 2009.  Leah had moved out of the baby room to share with Bethan and for a few months I had a sewing room before Mathias arrived so I could leave projects out and not have to tidy away every mealtime!  I also remember Bethan coming in and asking for scraps of fabric so she could do some chalking too!  I must have done a lot of cutting before this but when I don’t know.

Sewing started: no idea, the large squares were mostly sewn this year and therefore most of the inset squares were sewn this year too.  I remember giving up on it possibly Summer 2009, I tried insetting the squares and just could not get to grips with it, it was then put away in the loft until earlier this year.  I’m not quite sure what but something really inspired me to get the box down and crack on with sewing it.

In summary the quilt measures 78″ x 78″ approx, fabric used are Woven Stripes by Kaffe Fassett, I’ve no idea if they are still available – remember I purchased them in 2004!  Backing is stripes left over from the front along with Grape Shot Solid also by Kaffe.  Binding is made from left over stripes cut on the bias.

This quilt is for my son Mathias and I hope it lasts him for many years – he’s almost 2 so it’s quite enormous for him right now but he’s growing!  (Tobi laid it out on our bed the other evening to have a look at it and it fits really nicely…)

The pattern and instructions in the book are clear.  I would suggest that it is suitable for an intermediate to experienced sewer due to the inset seams, but what do I know?  All I’m saying is they are tricky, once you’ve done all 112 you’ll be competent!  I look at the quilt now and can tell which ones I did first.  I’m not sure the instructions for the inset seams were the best (in fact there seems to be an error in the text – it repeats one paragraph twice which really confused me!) and I did take some photographs of how I did it once I’d got the hang of it thinking that I would put together a tutorial, I’ll try and revisit that and see what I can remember!

The book itself is full of beautiful photographs and this is the second quilt I have made from it, I’m now believe it or not considering a third.  Hopefully it will be completed much quicker.

Go and visit for book reviews, author and editor interviews and even a giveaway or two!