The fact that this last week was Kids Clothes Week almost passed me by, preschool finished for my son on Tuesday but the girls were still at school and there were a number of events going on that we needed to attend/prepare for.

However, I had been thinking about making my son a Western Shirt from the Little One Yard Wonders book, so on Wednesday morning I taped the pattern paper to the floor and he watched while I traced the pieces: 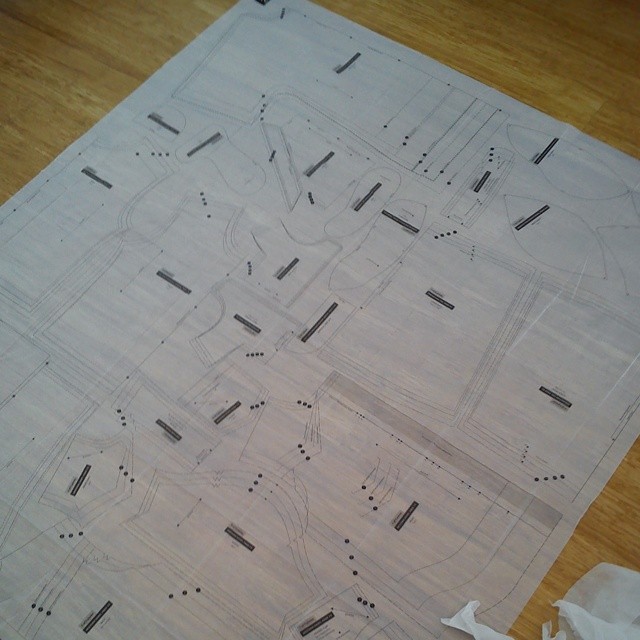 I somehow found time to cut the pieces from yardage of Circa 60 Beach Mod by Monaluna which I bought on sale at the beginning of last year (2 metres for £12 of organic fabric is pretty good for the UK).

I was able to get stitching the same evening and was happily getting on with it until I tried to fit the collar and collar stand onto the shirt.  Now, I have some experience of sewing clothes, I would not call myself an expert but I could not get the the pieces to fit, even with a bit of wiggle and stretch for ease there was no way.  I checked the instructions, I checked that I had traced the pattern pieces correctly, hoping that maybe I’d just traced the next size up and that was why I was having so much trouble, but all seemed fine. 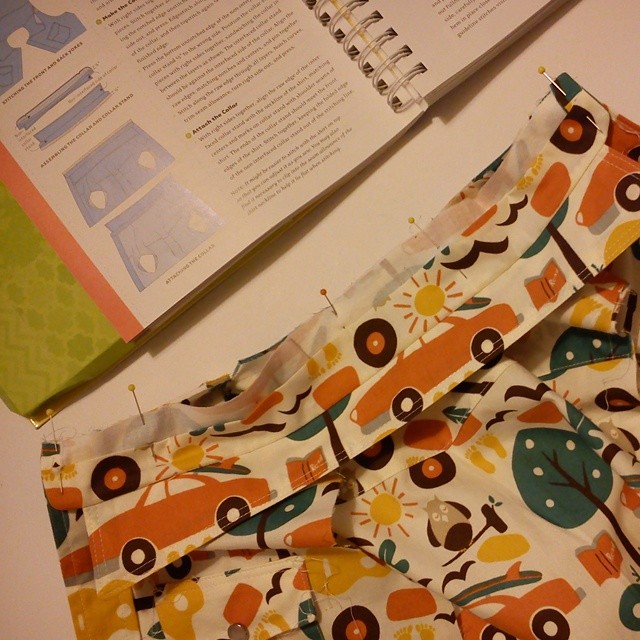 The book is new so I wasn’t holding out much hope of finding any pattern reviews or errata but I did search, I also asked for help on instagram and had some suggestions but to be honest there was not much anyone could do without seeing the pattern and garment!  So late on Wednesday night I emailed Rebecca Yaker who is joint author of the book but also designer of this particular pattern. She responded within the hour (although I had gone bed as I was tired and somewhat frustrated!) saying that she would look at it the next day and get back to me.

I fiddled around a bit more with the collar, rereading the instructions and checking every pattern piece again. What I did discover is that the front left piece of the shirt is 1/2″ narrower than the right once the plackets are made, therefore the collar was 1/2″ longer on that side and doesn’t fit. I was pretty convinced I wasn’t wrong but was also struggling with how to resolve the problem.

I occupied myself with other things until late on Friday afternoon I received an email from Rebecca confirming that I was right! Woo hoo! I know I shouldn’t be delighted at someone’s error but really I was delighted at the fact that I wasn’t stupid and hadn’t missed anything!

Rebecca not only confirmed that there was a pattern error but also offered a solution to my problem, bearing in mind that I had already cut all the pieces.  I won’t go in to the technical details here but it was a fairly simple unpicking of the placket and sewing it again with smaller seam allowances.  Rebecca is working on a solution for further prints on the book and for the errata page on the Storey website.

So funnily enough Friday night was spent fixing the error on the shirt and finishing the shirt, by 10pm I had finished but was pretty exhausted!

One of the reasons for making this shirt was because Mathias likes a ‘proper’ shirt rather than t-shirts, something to do with being like Daddy (although he generally only wears them for work) and he also like to have the top button done up.

Saturday was another hot day but Mathias was happy to wear his new shirt and model for photographs in the park: 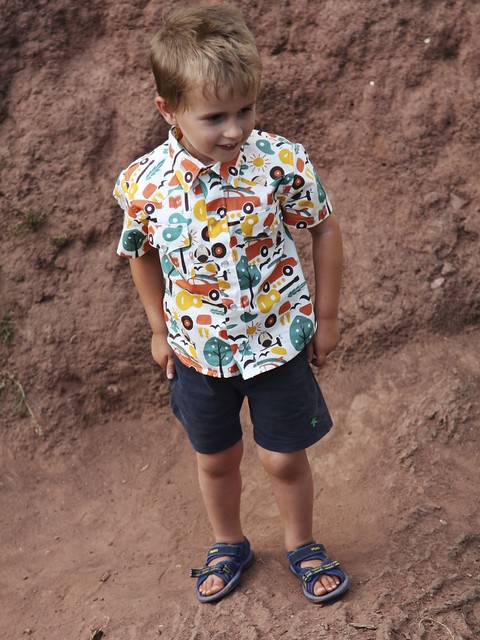 One of the things he loves about the shirt is the ‘gold’ buttons; they are not in fact gold or buttons but they are shiny poppers (bought from the car boot the other week, 50p for a full packet!) and so just like pirate treasure: 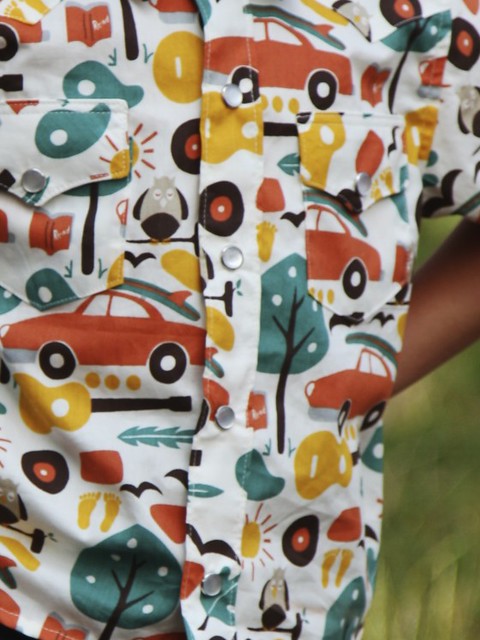 I made a size 4 for him, he’s small for his age (5 in October) so this is a good fit on him, in fact at the rate he grows I’m sure it will still fit him next summer! 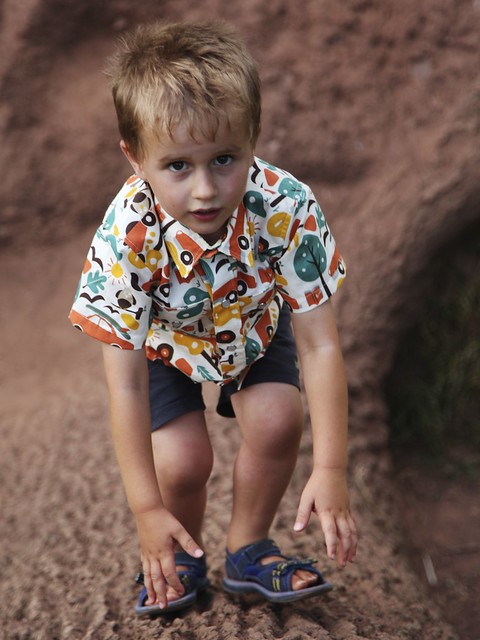 I wasn’t there for the photo shoot (I was waiting for voile to finish in the washing machine so I could hang it out to dry) but apparently he wanted to do a proper pose: 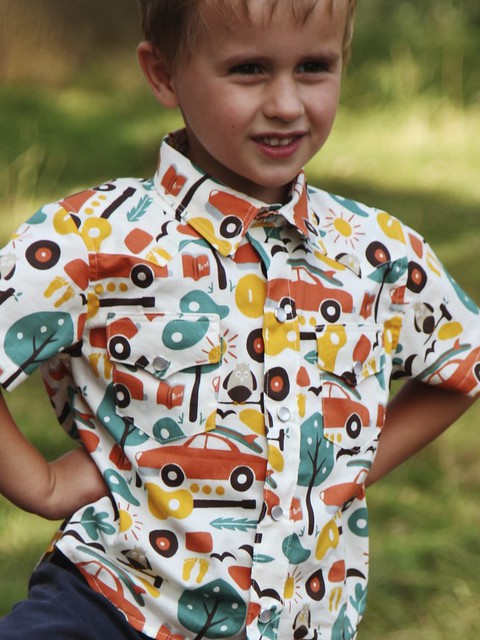 I’d say he did pretty well!

Aside from the major problem I had with this shirt I really enjoyed making it, I love the detail of the yoke and the pockets and with it being for a child it’s pretty small and easy to work with: 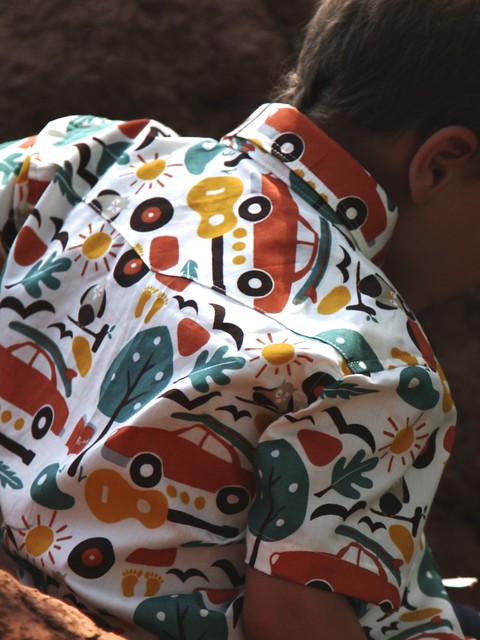 I wouldn’t hesitate to make it again. I mentioned above that I had 2 metres of fabric to work with but as the title of the book suggests you can make this with only 1 yard of fabric (although the selvedge on this fabric was really quite wide so I might have struggled).  Some pieces are not cut on the grainline as you can see in this photo: 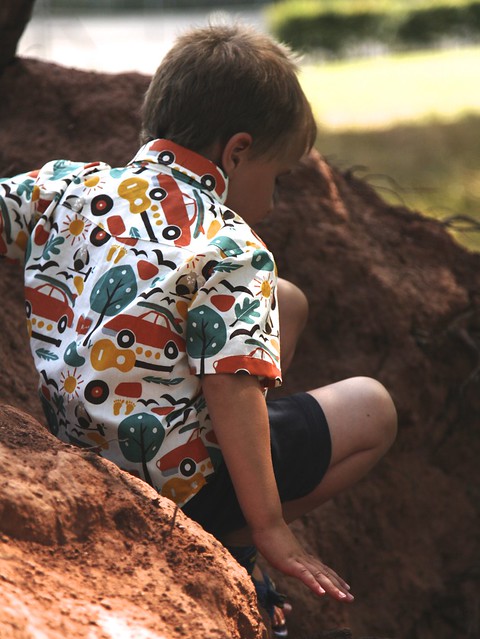 I like how this adds to the quirkiness of the shirt and there is also no stress about pattern matching either!

The girls wanted to get in some photographs too, they are both wearing shorts I’ve made this summer, I’ll write about those soon. 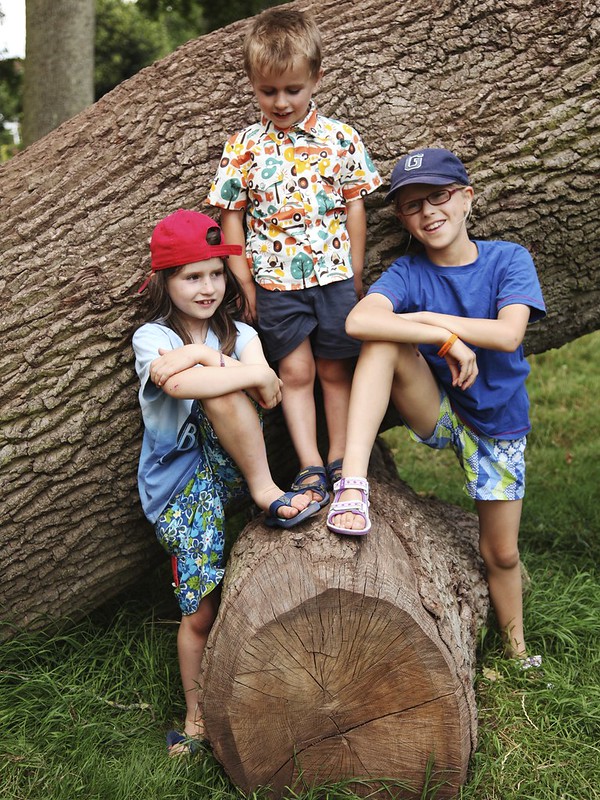 So in summary a frustrating but ultimately successful Kids Clothes Week! 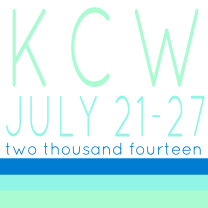