It’s been a while since I’ve had any new fabric to show but on Friday I went on a road trip to the Festival of Quilts in Birmingham and came home with a few new additions…. 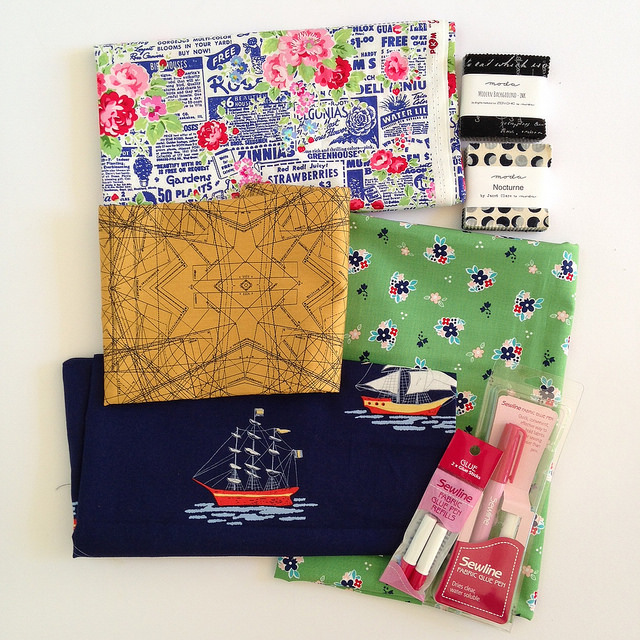 I was on the look out for a couple of things but didn’t find either of them; backing for my Winterberry quilt (I’ve not started it yet so it’s not urgent) and some low volume prints there were plenty but there were none I had to have.

What I did find was My Favourite Ship from the Out to Sea line by Sarah Jane Studios (for Michael Miller), my children love this line and this is one print that we’ve not had so I bought a metre of it from Abakhan: 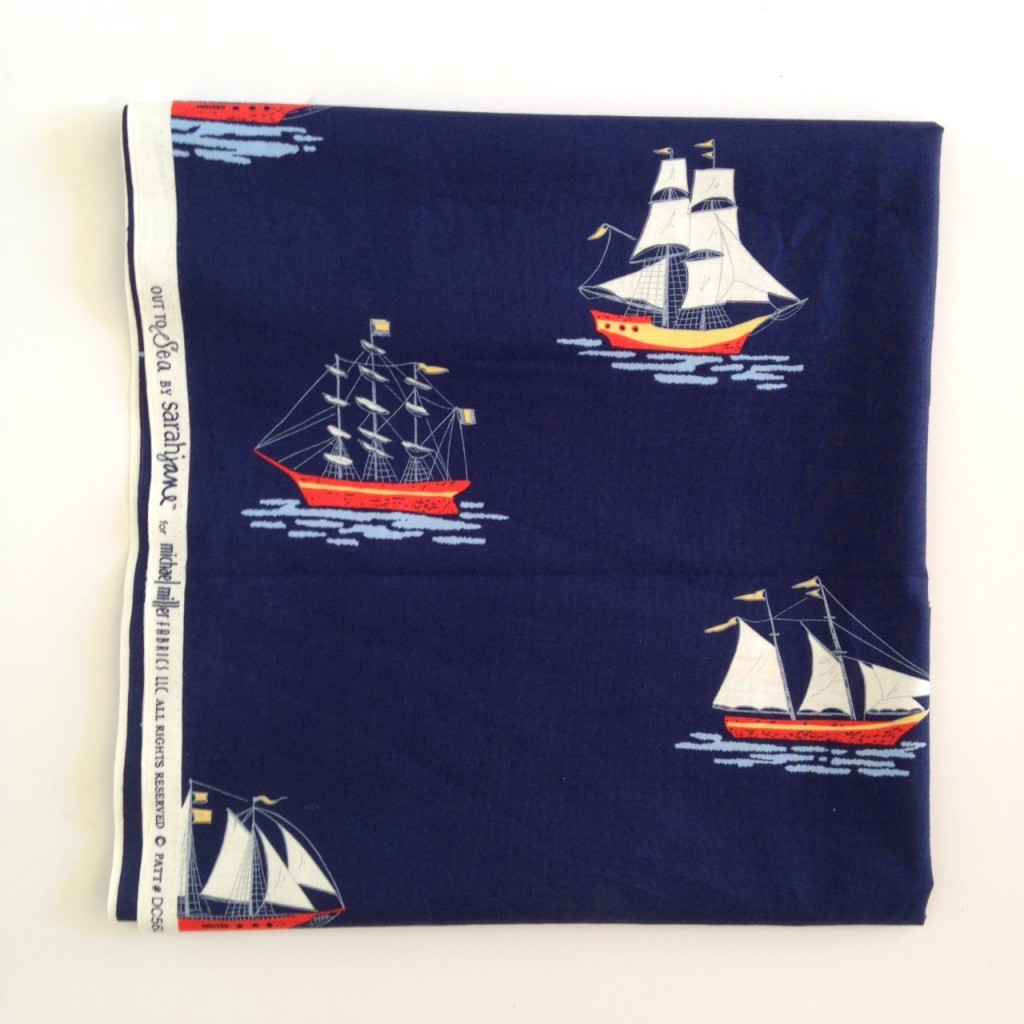 Also from Abakhan was half a metre of Spirodraft in ocre from Indelible by Katarina Roccella for Art Gallery Fabrics, I love the print and had a hunt round to see if I could find it in grey too, but no luck: 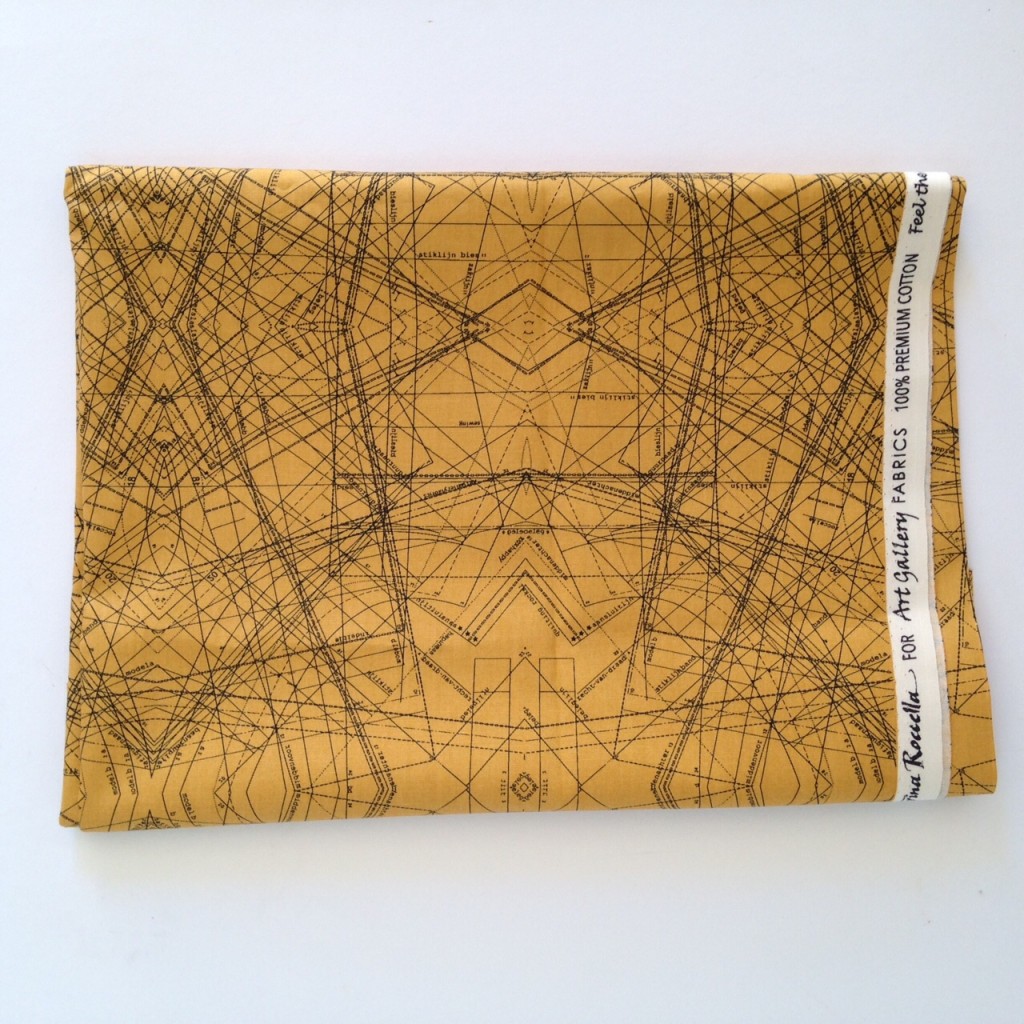 A great stall to check out is always The Shuttle, they didn’t have so much that caught my eye this time except for this gorgeous green print, I think called Country Floral from Country Girls  by Tasha Noel for Riley Blake, so I brought home 1 metre.  Look at those cute ducks on the selvedge: 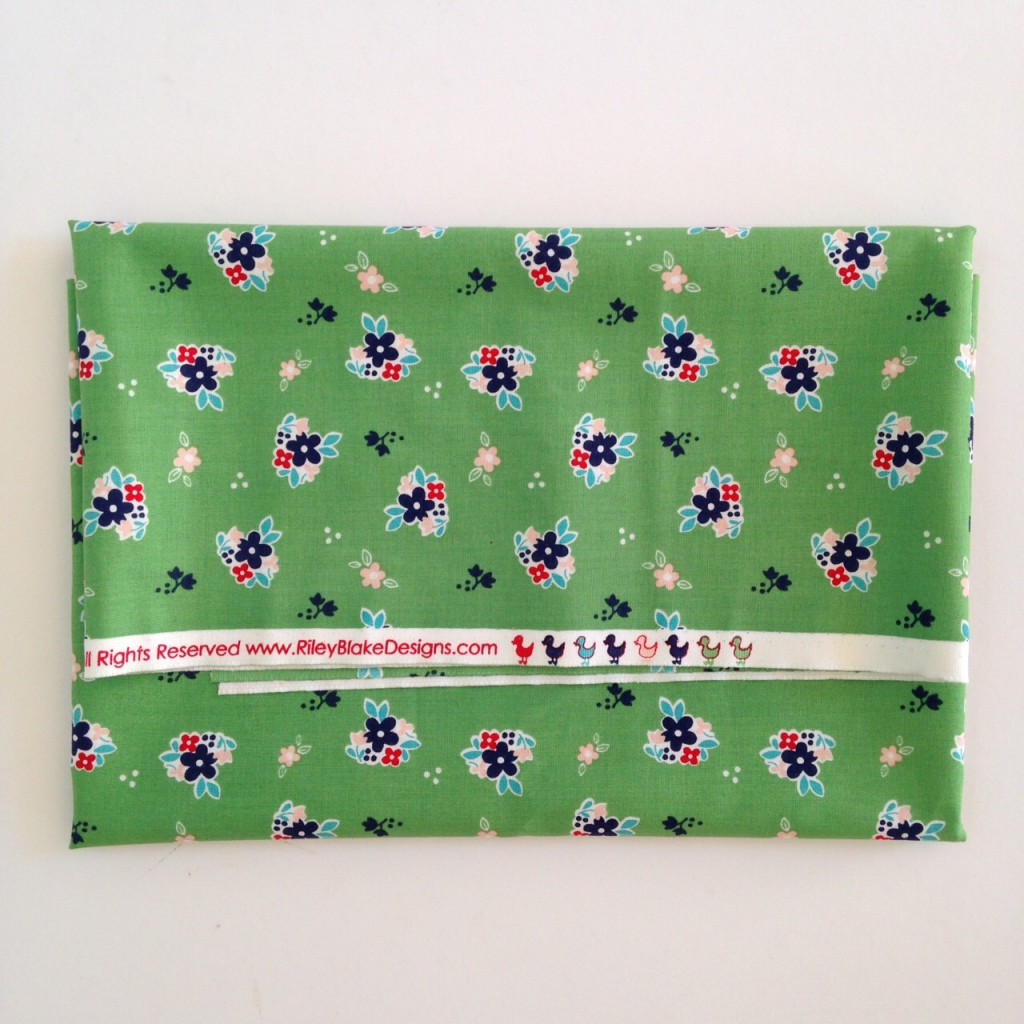 It’s fun to discover new shops while at the festival, I’d not come across Sew much to do, they are based in Ely so the other side of the country to me and I’m not sure if they have an online shop (their web address isn’t working this morning) but you can find them on Facebook.  They had a great selection of fabrics for just £6 p/m so I bought 1/2 metre of this Garden Focal, Pam Kitty Garden by Holly Holderman for LakeHouse Dry Goods: 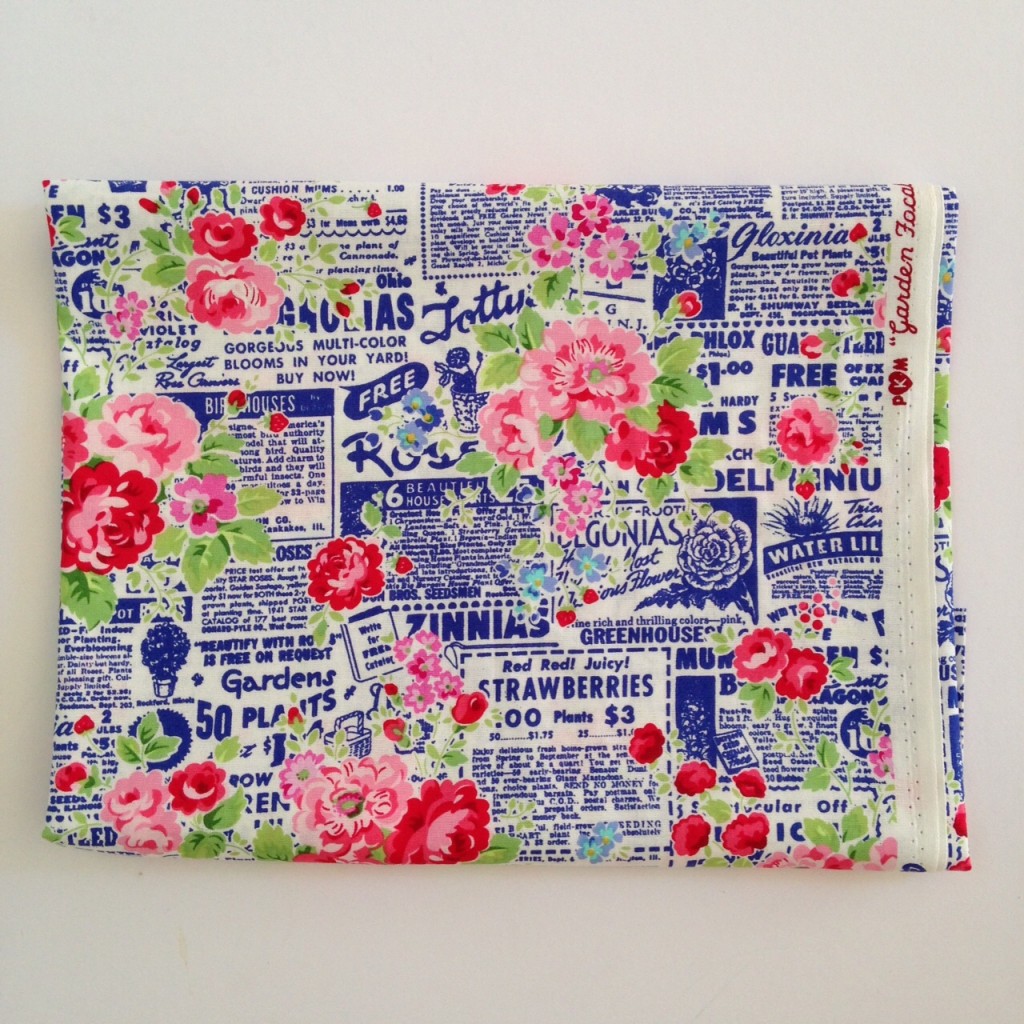 I’ve no idea what I’ll use this for but it’s a superb print that is great for fussy cutting or to use as a whole.

For I believe the first time Moda Bakeshop came to Festival of Quilts and were giving away mini charm packs (aka Moda Candy).  The first one I was given was Modern Background Ink by Zen Chic, I have her Modern Background Paper on my wish list so was delighted to receive this.  We were told that if we came back a bit later then Janet Clare would be there giving away some of her new fabric line Nocturne.  It looks like it will coordinate well with Hearty Good Wishes which I also have a mini charm pack of: 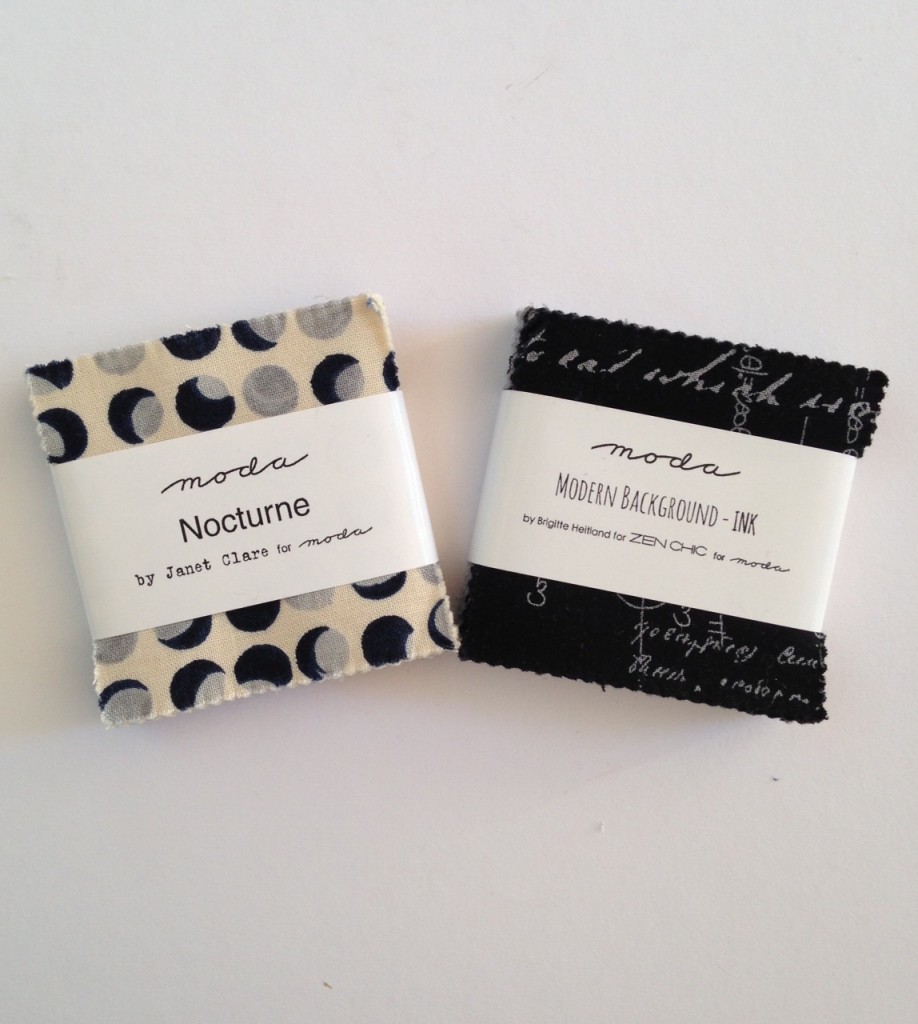 The other thing I bought was a Sewline glue pen and refills, I’d been pondering trying them out last month when I started all that EPP but decided that with the additional cost of postage I would just baste the pieces with thread.  As I saw them at the festival I decided to try some out and actually used it twice yesterday not on EPP but a couple of other sewing projects that needed a bit of glue!

I won’t be back with another post on the festival, there were many stunning quilts,  it was wonderful to meet up with lovely people who I might see once a year but have contact with online all year round.  I didn’t take any photo’s preferring to take it all in with my eyes!

I’m linking up with Molli for this weeks: