For a while I had been thinking about making a tent/playhouse or something for the children to use, last October when Mathias was but a few weeks old I bought this pattern with the intention of making it for the girls for Christmas 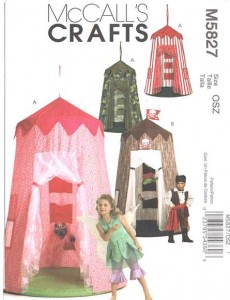 Somehow despite having a tiny baby to look after and Tobi finishing off his MSc I managed to make it – finishing it off on Christmas Eve.  After the girls had gone to bed we hung it in their room for them to discover in the morning.  When Bethan awoke she saw it but first asked ‘have our stockings been filled?’.  They then proceeded to sit in it and eat the goodies that were in their stockings and spent hours during the winter playing in it.  My plan/dream was really that it could go in the garden as there isn’t that much room in their bedroom for it to hang.   Yesterday Tobi had a day off and I was out for the day with the children, we came home to find that he had made a scale model of a contraption to hang the tent from, saying that we had all the bits we needed in the garage.  Tobi then spent yesterday evening out in the garden, when it was dark he asked me to come and have a look and there it was all made just waiting for the sun to rise and a tent to be hung.  This morning the finishing touches were made and the girls moved in – it is superb! Now all we need is the grass and plants to grow!

If you like the look and want a simpler version look at the Sew Mama Sew blog for another idea. 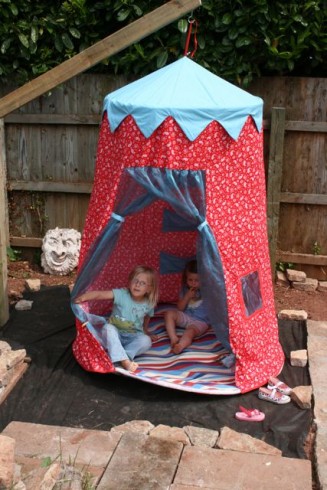