So, back at the beginning of May I signed up to Summer Sewing Plans hosted by Sarah at Fairy Face Designs. I’m now just reviewing where I am with those plans!

I’d already signed up for Kids Clothes Week Challenge and during that week managed to sew 2 pairs of shorts, finished 4 more pillowcase dresses for Dress a Girl Around the World, here’s Leah modelling one: sewed 2 more pairs of Big Butt Baby Pants for my boy as he’d almost grown out of the ones I made last year. I finished the appliquéd t-shirts that I had started and they are being worn a lot, I think the girls like the dog one particularly because Mathias says ‘gog’ alot (which means dog) and it makes us all laugh! I wanted to make myself a bag (read more about it here) and I did!  I use it most days and I love it! One of my more ambitious plans I felt was to make myself a top.  At the time of writing in May I really didn’t think I could do it and then I came across the Sorbetto Tank Top pattern by Colette a free download so what had I to lose?  If you were reading last week you would have seen my post about it, well I started another one on Friday night and would have had it finished that evening if it weren’t for my lack of attention!  I sewed the bias binding on the right side  rather than the wrong side which meant I needed to undo it.  However our delightful children obliged with an early morning call on Saturday and once I’d sorted breakfast for them at 6:45 I got on and finished the top (yes still in my pyjamas!).  Here it is: 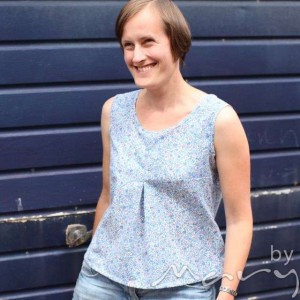 I’ve done this one differently, reversed the front pleat so it’s on the outside and only stitched it part way down rather than all the way to the bottom.  I quite like it.  I’m debating whether or not to add some buttons to the front, will have a look and see what is in the blue button jar!  The fabric came from a dress my mum passed on to me, I’ve already made Bethan a pair of shorts out of it!

I planned vaguely to sew a bike basket for my daughters 4th birthday – that was last month and I didn’t do it, Leah has taken the basket off Bethans’  bike and both seem happy about that so I don’t think I will be making one now!

I have made some progress with the Kaffe Fassett handkerchief corner quilt – some of the blocks have been sewn into strips so it could be finished before the end of the summer.  I think it will just depend on what else distracts me and I suppose the fact that there is now only 2 weeks before school and preschool break up and there are a number of end of term events in the calendar at which a parent should attend!

I’ve not yet made a start on making an Amy Butler ditty bag for my boy, I’ve got fabric that would be good for it…

Ok, so that was everything on my list, only 3 things not done/finished and there is a whole load of other stuff that I have been doing that wasn’t on my list.  I’ll see if I can finish the quilt and make a ditty bag before the summer ends!