What did interest me more was his talk about his visits to fabric shops!  They were due to fly home on Saturday evening local time so had Saturday at leisure.  Their choice of leisure was a run before breakfast!  I’ve never been to San Francisco but I’ve seen enough films to know that it’s a hilly city, hills and running?  not my idea of leisure.  After breakfast they headed off to find Mendels.  It sounds like a fairly amazing shop in a very interesting area!  Now I’m thinking I should have got Tobi to guest write this post….

Anyway the main purpose of his mission to Mendels was to buy some chalk cloth…no photo of that, I could take one but it’s all rolled up and it’s black fabric – not very exciting, so please be patient and when I’ve done something with it I’ll show you.

He did also pick up these little beauties there: 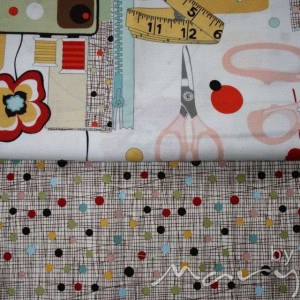 They are all Alexander Henry prints, above Sew Much Fun and Downtown Dots in Mocha, 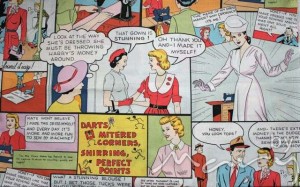 This print is called ‘Home Sewing is Easy’ and one I’ve wanted to get my hands on for a while, I ordered some from Prints To Polka Dots back at the end of May but never received it (I have never received such shockingly bad customer service as I did from this online store and I know I’m not the only one).  Tobi spotted it and kindly bought me a piece (I think it’s 3/4 yard).  No idea what I might do with it as it’s quite a large print, it might become a bag….(he’s just proof read this post for accuracy and said ‘I didn’t know you wanted that print’ what a star!).

Those fabrics came with a free bag: 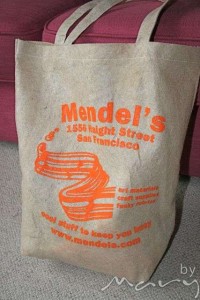 which they normally only give them out when you spend a lot of money but I think they might have been amused by 2 British men shopping for fabric!  Tobit wasn’t sure if they understood his sarcasm, he told them they had flown over just to shop for fabric!  Now that is an idea that appeals to me.

I think all the other fabrics came from Peapod Fabrics 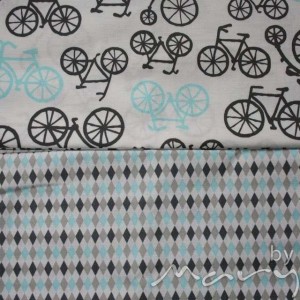 Michael Miller prints that go with the laminated cotton I bought back here, so whatever I decide to do with it I now have some prints that co-ordinate with it!  (Good thinking Tobit!) 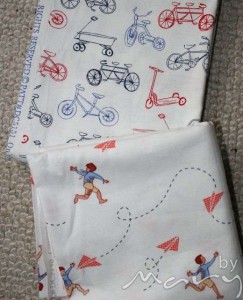 Some more bicycles and paper airplanes from a fantastic nostalgic range by Sarah Jane Studios for Michael Miller. 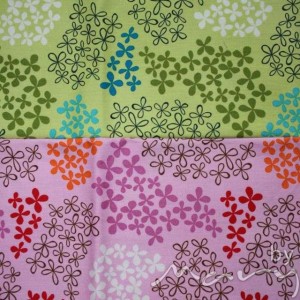 Tobit bought these two I think because he liked it, he can’t remember what it is and I’ve never seen it before, so if you can shed any light on their identity please let me know (they’re fat quarters so I’ve got no selvedge to work from). 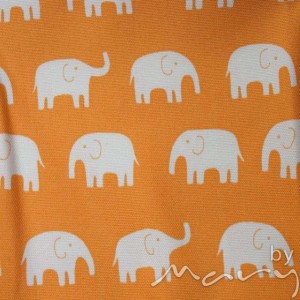 Elephants by Junko Matsuda bought for Leah because of the colour although I would call it yellow rather than orange but I am not complaining!

So from my point of view it was a useful trip however I am only just recovering from the four days that he was away, ok so it might also have had something to do with the crazy few weeks we have had with Leah at school part-time and the number of trips I’ve had to do back and forth to school.  I picked Tobit and Andy up from the station on Sunday evening and was hit by a wave of exhaustion which is just dispersing now.

But life has to go on and the charity shops still need checking out, On Monday I went into the charity shop 3 times, mainly due to the long queues at the post office and the school run!  (It’s not complicated but I won’t bore you!).  Anyway on my 2nd visit I bumped into Karen from The White Approach (to be honest we see each other in there frequently) who had come across a box of bias binding tapes, I was excited, there were lots of them, 20 – 30 all still in their packets.  What to do?  Get to the post office quick!

By the 3rd visit these pillowcases had appeared, a pair of pink and a pair of yellow 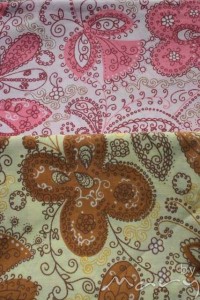 So I snapped those up quick and then deliberated over the bias binding packets as they weren’t cheap and so I picked out a few of those that I thought I might actually use. 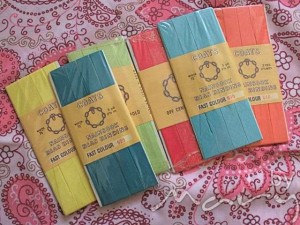 There were even more in the shop yesterday, someone somewhere is having a clear out and I’m wondering what else they might have to donate.

The other thing that has come from the charity shop this week actually came via a friend who bought a gorgeous vintage maxi dress and has cut it off around knee length, and donated the left over fabric to me!  Ok truth be told, she asked my advice in the school playground last week and I told her to cut it short just so I could have as much excess fabric as possible!  Was that wrong?  Wisely she went with what she thought would be decent! 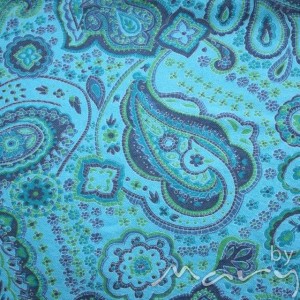 Thanks Kate for this delicious piece of fabric!

4 Replies to “How to shop for fabric in San Francisco? Send someone else…”