Earlier this month we received a wedding invitation from a friend of Tobit’s.  The groom has made a few films with Tobit (including this one Always Hope) but I’ve only met him a few times when he’s come round to pick up/drop off film kit.

Some people would start thinking about what to wear but my mind immediately went to ‘what shall I make?’.  The obvious theme was something film/camera related, I don’t know what ‘she’ does other than something creative/arty so though that while it might be more his thing than hers, she probably wouldn’t dislike the theme!

I searched for a paper pieced camera block and came across this one by Soma of Whims and Fancies.  Tobit approved and so the planning started.  I’d already decided it would be a cushion cover – (feedback from my brother and his wife whom I made 2 cushion covers for as a 1st anniversary gift recently tells me that it’s a good gift, they were delighted as they only had one cushion).

I pulled out all my grey and black fabrics, printed out the pattern and started working out what colours should go where to get the best effect.  The camera lens on the pattern picture is a light colour but I thought that generally lens look dark so decided to go for something along those lines.  I wanted to use something other than a solid to give a bit of texture especially as the rest of the cushion was going to be mostly solids.  I had some Alison Glass Sunprint text that is a great colour and has some interesting text: 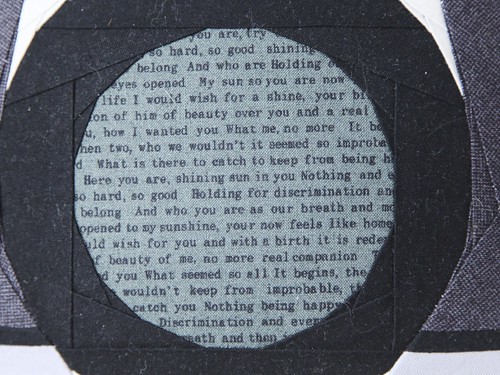 The black I think is Kona black, I’m not sure, the other colours used are Kona’s: Snow, Coal, Silver and Grey.  The main parts of the camera are, I think Wickerweave in charcoal, it’s definitely by Renee Nanneman for Andover Fabrics. I think it gives the texture of the camera casing pretty well. 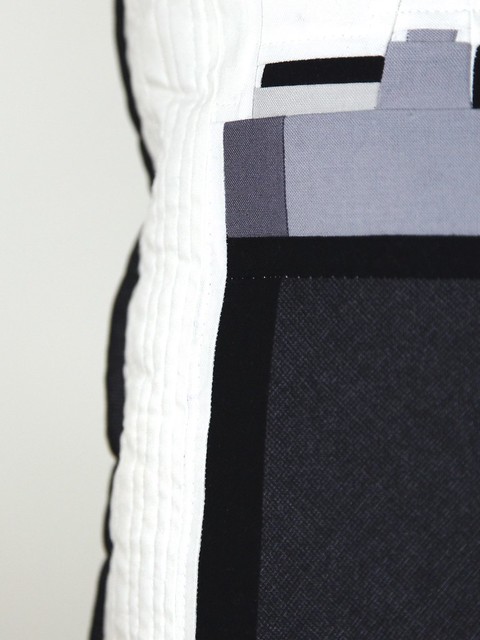 I started by piecing the lens and discovered an error in the pattern. You know when you can’t quite get your head around something and you think you’re right but… Anyway I emailed Soma and had a response the next day with a renumbered pattern. By that point I had worked my way around it but it was good to know I wasn’t just confused! The pieces were correct just the numbering was wrong. 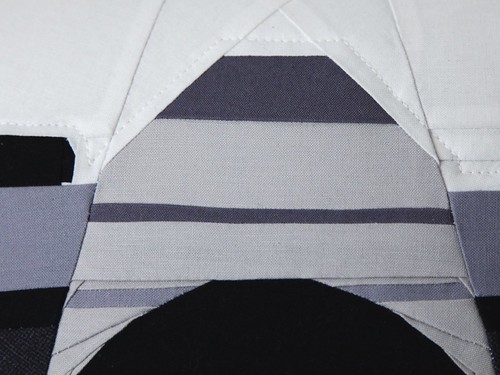 Aside from that and some tiny pieces to deal with it went together well. It was a nice change from quilting too!  The one thing that niggled me was that due to my fabric choices I used black and white threads, on sections where there are both colours of fabric I had to decided which threads to use and hoped they wouldn’t show through.  I can see thread in a couple of places, others probably won’t notice but if you have any suggestions on how to avoid this please let me know! 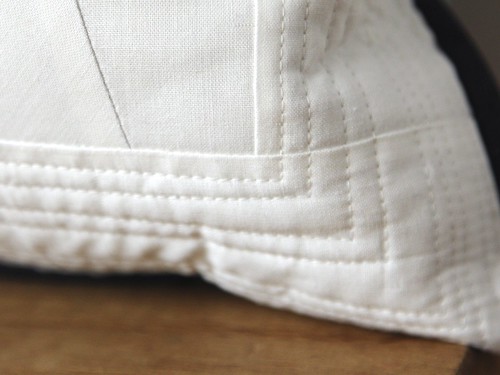 The block finished up at 12.5″ square so I added a 3″ border all round.   I used an offcuts of wadding and quilted round the outline of the camera and then randomly quilted lines round the border using Aurifil 2021 50 wt. 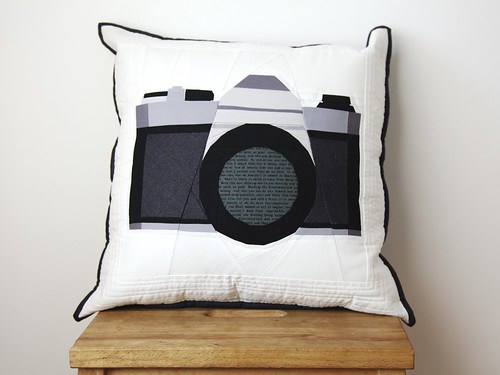 I knew I had a few camera theme prints in my stash so I pulled them all out and auditioned them for the back of the cushion cover; Cameras from Ruby Star Sparkle by Melody Miller won: 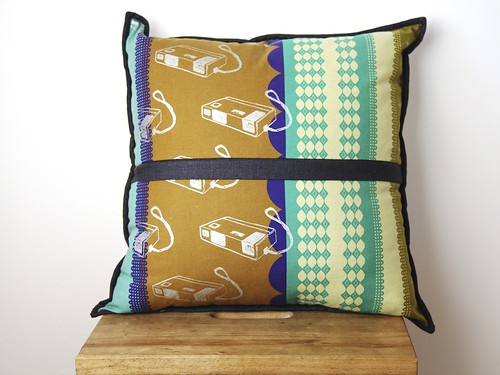 Putting a zip in the middle is my preferred cushion closure so that I can add binding to the edges to give it a nice finish.  But then with a pattern like this you have to work hard to try and make sure it all lines up.  This was my first attempt and I felt like it was close enough,  hopefully the focus will be on the other side!  The binding and zip cover are the charcoal wicker weave used on the the front. 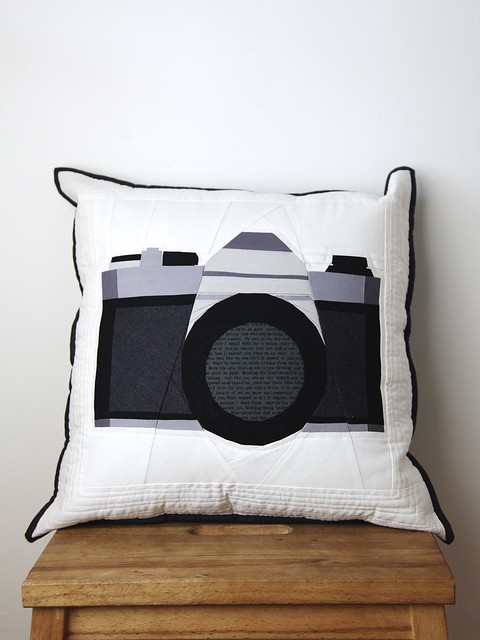 The wedding was yesterday, thanks to some fantastic friends we had a night without children for the first time in 10 years! We camped in North Devon, did a couple of stunning walks and had a wonderful evening celebrating with friends. We’re back home now with the children and we are all a bit tired!