Tobi had a birthday this weekend, each year it comes around on the same date so there is no excuse to forget or claim it just arrived without me knowing.  So a month or so ago I began a bit of plotting with Bethan.  We’re not up for spending lots of money of presents because a) we don’t have lots to spare and b) I think something from the heart is better (and I wasn’t convinced he ‘needed’ an iphone!).  Certainly from the childrens point of view who have little or no concept of money it seems crazy but for them to make something I think means a lot more.  So Bethan did a simple drawing: 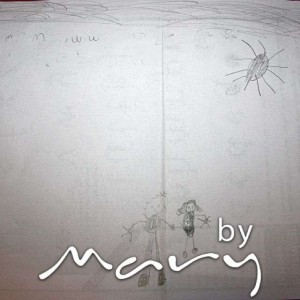 And then I traced it onto some calico: 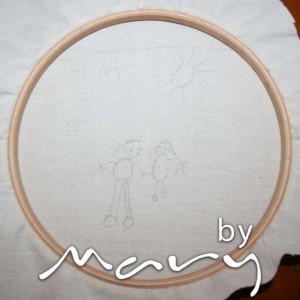 Please excuse the photo’s, it’s pencil so not easy to see but hopefully it will give you an idea before you see the finished item!

Bethan choose the threads and fabrics that she wanted to use and we spend some time sewing together.  I must admit a did a lot of it, some of it was really fiddly but both she and Leah were really interested.   We used the hand powered Singer so both girls had a go at turning the handle which was good fun and great to see them interested and engaged.  When completed I removed it from the hoop and rehooped it and finished off the back, tidying up the threads and stuck a piece of felt it to hide it all! 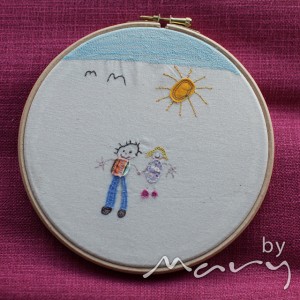 And here is an absolutely lovely photo taken by our almost 4 year old of the artist and the birthday boy!  Ok, Tobi tells me that he lined up the camera and Leah pressed the button, but pretty good all the same! 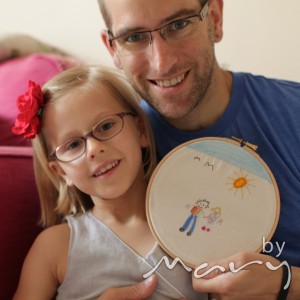 This week I also commented on a some photo’s that Saints and Pinners posted on their Facebook page asking for comments on their Super Quick Quilt packs and two randomly picked commenter’s would receive a prize – imagine my delight when I got in from Make, Do and Mend on Tuesday night and Tobi said ‘oh you’ve won a prize’.  This arrived in the post on Thursday morning, beautifully wrapped as usual: 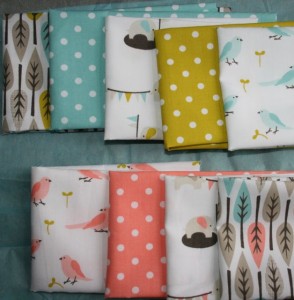 A Petite Pack of My Happy Nursery by Cloud9.  They are fat 16ths, or quarter of a fat quarter if you prefer!  Both of Tobi’s sisters are expecting babies this summer so I might find a use for these quite soon!

Teresa sent me a message to say that she had received her Spring Scrap Swap, so I can share that here now: 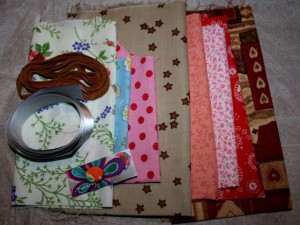 I sent this little bundle of fabric to her.  From left to right: some ribbon from my stash, vintage (probably) floral print, some left overs from the pillowcase I used to make a pillowcase dress, the next is also left overs from a pillowcase dress – fabric donated by Sewbox.  The pink with red spots is from a dress that has been handed down for my girls, but it’s been well worn and beyond fixing so I’ve taken it apart. The stars – almost a fat quarters worth has been with me for a long time from I don’t know where and not been used so I was hoping Teresa might find a use!  The peachy/orange print I think I bought for using in this quilt,  struggled to find orange and I think this was an option, I can’t remember if I used it now and I’m too tired to go upstairs and research properly!  The pink and white floral print is from another little girls’ dress that had seen better days (both dresses were made by the girls granny and beautifully made and deserve to be used again for something).  The red and white print if you’re a regular reader you will have seen before, bought for the girls play tent/canopy, left overs used to make one of the first pillowcase dresses, shorts for both girls and who knows where else it might turn up!  The final print is a bit like the stars, not sure where from, I must have had an idea once but I’ve no idea what!  It was really good to have a sort out, I tried to find as much recycled fabric as I could and feel that 50% of it is which is not bad.  It also gave me a chance to start thinking about what supplies I could give away for the Sew, Mama, Sew giveaway day coming up later this month it could be quite therapeutic if I’m brave!

3 Replies to “Birthdays, prizes and swaps”