I’ve mentioned a couple of times recently that I was involved in some pattern testing.  Today I can reveal all.

Vanessa at Little Big Girl Studio (who hosted the Dress a Girl Around the World sew-along I took part in earlier this year) had put out a  request for pattern testers for the pattern that she had designed, so fancying a challenge I volunteered, not sure really whether or not that was a good idea!  It was fine, concentrate and read the pattern through before you start is always good advice, but remember there could be flaws as it’s a draft pattern so I did have to check!  Anyway feedback went to Vanessa and she made amendments/adjustments to the pattern and it’s now for sale!

The bonus for me after testing the pattern was that Vanessa asked if she could use our photographs for her blog post! 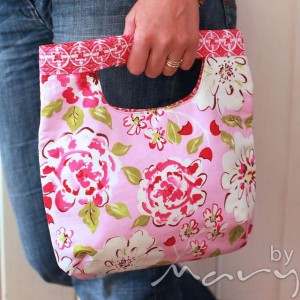 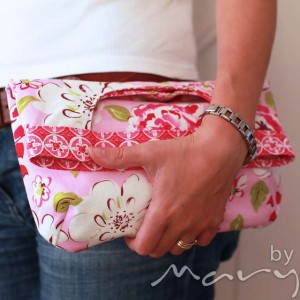 So if you want to know more about the pattern and/or want to buy it head on over here.  It’s suitable for advanced beginner sewers so I recommend giving it a try!  I now just need to make one in more autumnal colours!  The one pictured will be great for next summer.

This week I’ve been sewing like a dream!  After having issues with sewing through 4 layers of denim on Sunday and my machine objecting I went back to the normal weight of fabrics that I sew with and we’ve both been a lot happier!  I’ve no photo’s of finished products and might not for a while – more about that later!

Yesterday after lunch I picked Leah up from school and we had a couple of jobs to do before going home for an hour before it would be time to go out again to pick up Bethan!  So as usual there was a request to visit the charity shop, not being one to refuse, off we went.  I came away with one purchase, no surprise it was the fabric that caught my eye, as with other gems I’ve found it was hanging on the fancy dress rail: 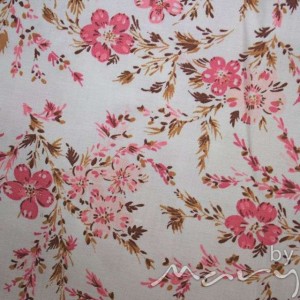 It’s child size, in fact it seems to fit Bethan. 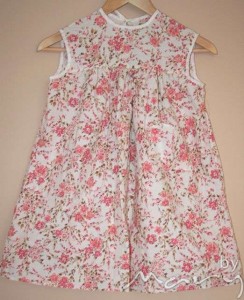 It’s an apron/smock, well that’s what I would call it as it ties up at the back of the neck and is open at the back.  It’s handmade, well made except that the bias binding wasn’t finished properly on the armholes so there are some raw edges, but most people wouldn’t notice. 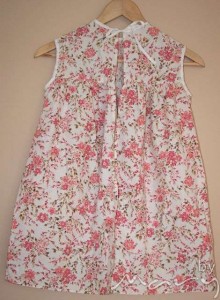 I love the fabric, however Bethan said that she wants it!  So we might have a fight on our hands!

That’s nearly it for now except to say that I probably won’t be back until next week and I ought to explain the title of this blog post.

Tobit has been invited along on a trip to San Francisco, we live in the UK so it’s a big deal, and it’s not actually a ‘work’ trip so it’s even more of a big deal.  He’s going with our friend Andy Robertson to a video games launch, Andy needed a camera person and Tobit apparently is just that person!

He’s leaving tomorrow morning and not back until Sunday.  So I’m solely responsible for all 3 children, which is fairly normal during the week but at the weekends I normally get a chance to sew!  Never mind I’m sure we’ll have fun and I’ll be owed quite a bit of undisturbed sewing time when he’s back.  So if you’re going to San Francisco forget the flowers in your hair but maybe you could find room for some fabric in your return luggage!

2 Replies to “if you’re going to San Francisco…”