Earlier this year I took part in the Dress a Girl Around the World sew-along hosted by Little Big Girl Studio and received a package of goodies in the giveaway at the end.  One of the prizes was my own selection of PDF sewing patterns from The Lily Bird Studio, I chose the Pink Dress and made this for one of my nieces: I also chose this shorts pattern and made a number of pairs of shorts for my girls this summer: 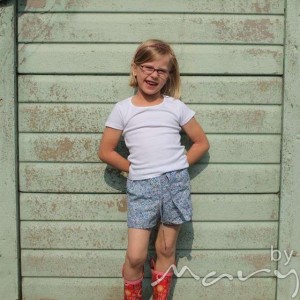 I’ve not yet used the other pattern which is a Sleeveless blouse, I’m planning to make a few of those for next summer, but probably need to buy lighter fabric for them.

I also started to read Cecilia’s blog So Tei-Tei and a couple of weeks ago she put a call out for pattern testers for her new pattern the Birthday Party Dress, so I volunteered and made this: 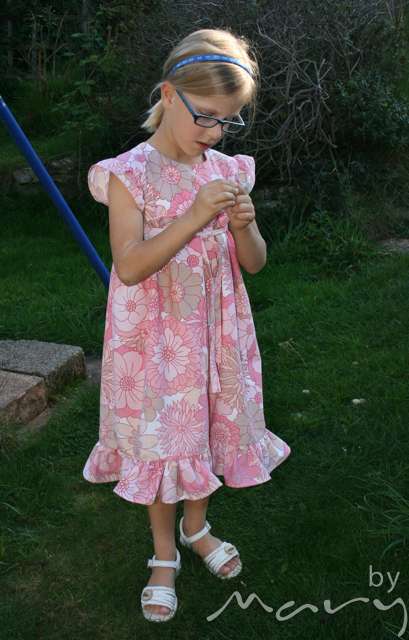 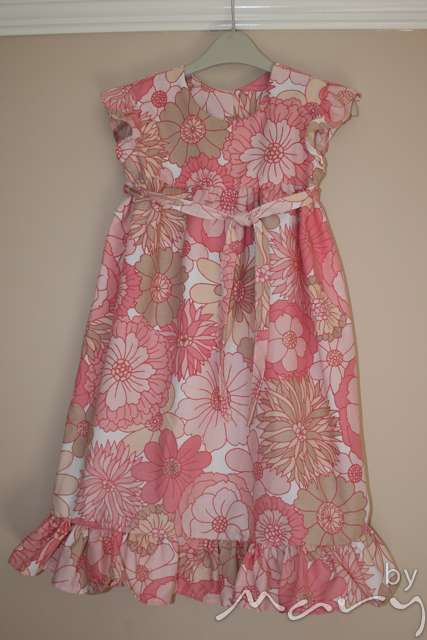 The fabric I used was a vintage sheet from St Michaels/Marks and Spencer (via the charity shop) circa 1970’s.  It was in really good condition and I thought I would use some cheap material for the pattern testing just in case it went horribly wrong – this is more a reflection of confidence in my own sewing ability rather than Cecilia’s’ patterns.  I started working on this when Tobit returned from San Francisco, because I wanted to get it done and wanted to do something that I enjoyed, I was, however really exhausted so wasn’t sewing at my best.  I think I sewed the bodice lining on wrong once, unpicked it all, sewed it on correctly and then realised that one of the belt loops had fallen out so had to have another go! I also didn’t follow the instructions properly and only cut out one piece for the ruffle on the skirt and then wondered why it wasn’t going to be very ruffley (is that a word?).  I think that my next attempt will be much smoother and there will be another one as Leah wants one too!

Bethan was really pleased with the dress, it now has Marmite down the front, it’s her birthday next month but it will be far too chilly I’m sure for a dress like this and possibly not appropriate as she wants to go climbing for her party!  But I did choose to sew a size 7 rather than 6 (she is probably average height for her age) thinking that this might be more appropriate for next summer!

I’m delighted with the pattern, it was pretty straight forward to make, ok, it would have been if I wasn’t so tired and is a really lovely dress.  Cecilia made her version for her daughters 3rd birthday and used a contrasting fabric for the ruffles on the skirt and the sleeves – it’s a really nice touch and one I would have gone for if I’d had a suitable fabric to use.

So if you fancy a new dress for a little girl then why not try this one, you can buy a pdf file now right here.

2 Replies to “Another pattern tested”