I haven’t mentioned that a few weeks ago at the car boot Kerry told me that she had a box of fabric in the boot of her car that she had bought previously at the car boot, she’d taken out what she wanted and the rest of it was up for grabs.  So along with Wendy and Barbra, Leah and I went and had a look, I could see why Kerry was giving it away, mostly scrappy bits or odd pieces, a bit shiny or silky not the sort of thing I would use.  Leah however was a little bit struck by it and was happy to take whatever the others didn’t want!   In fact she also took the cardboard box it was all in!

She was really quite excited on the way home and talked about having a fabric shop! When we got in she emptied it all over the floor to show Bethan what she had missed! 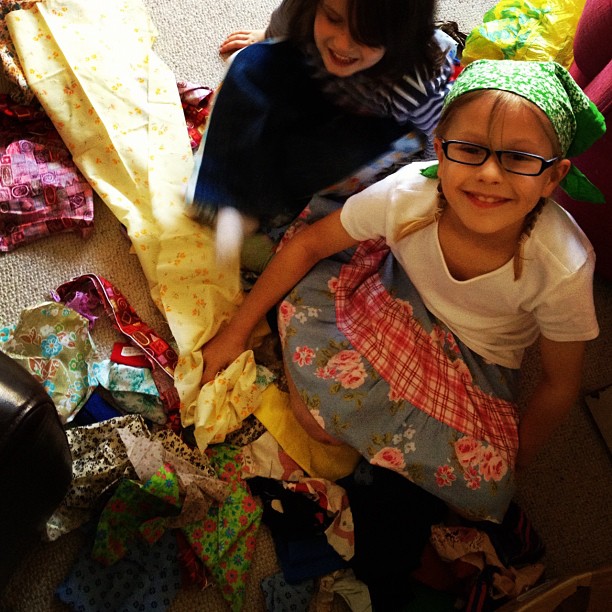 I persuaded her away from her very own fabric stash to have some breakfast and then she was ready to sew. Where to start with an eclectic mix of fabric? I steered her in the direction of a wonky log cabin, so she (randomly) selected fabrics, ironed them and I stitched them together for her. The block was backed with a piece of vintage sheet and became a blanket for Ookie the monkey, spied later that day snuggled under it in the pram (oh look the sun shone and it was warm enough for swimsuits). 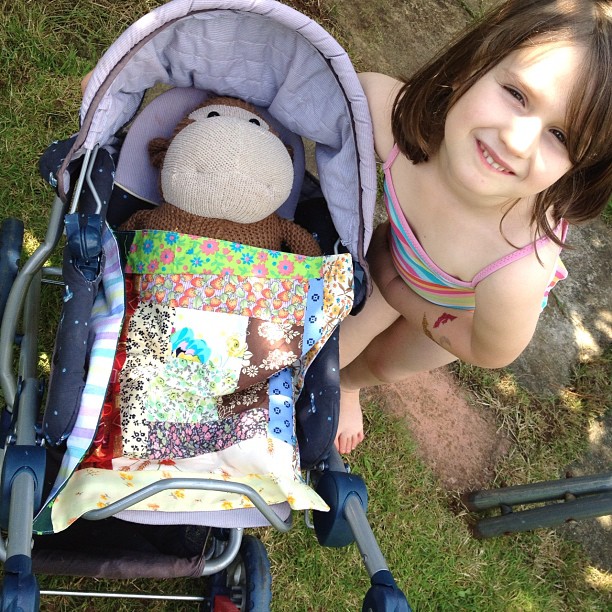 (oh and can you spot the glitter tattoos?!)
We’ve been sewing together again, come back tomorrow and I’ll tell you all about it!