I have two girls and really enjoying making things for them.  Last October Mathias was born and gradually I became obsessed with finding fabric for boys that wasn’t a nursery print, ‘twee’ or babyish.  I’ve also had ideas in my head for things to make for him and for boy birthday presents.  So I’ve made a number of bags which I think are great and Tobi has now taken some photos too.  I am reliably informed by a friend who has two boys that they tend to either like dinosaurs or vehicles and rockets but not both!  I have lots to learn on that front.  So I went for dinosaur fabric (which is a Tyrrell Katz print I picked up on ebay), monsters, racing cars and a jeep.  I have also now got some rocket fabric so may make some rocket bags too.  Let me know which ones you like and if there are boys who don’t like any of those things what do they like?  I am planning to do a girls version although Leah has asked that i make her a dinosaur bag for her birthday – so she’s obviously not too bothered about girly stuff just yet (despite saying ‘boys are not my favourite’ alot!) 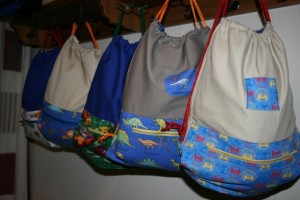 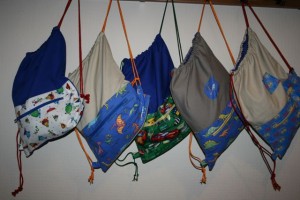