I had a request from Bethan for a new lunchbox, so as I had won a pattern in the Dress a Girl giveaway I didn’t feel like a had an excuse for making one.  Obviously it would be easier to go and purchase one from the huge range on the high street or supermarket, but where would the fun be in that?  The alternative is to spend a little while browsing the internet looking for laminate fabric which would do for the lining of the bag and get sucked into looking at other fabric too!

So I searched for laminates and found some that I thought might do and Bethan agreed that they were lovely so we shopped.  Of course you may know by now that I’m incapable of buying fabric just for the job… 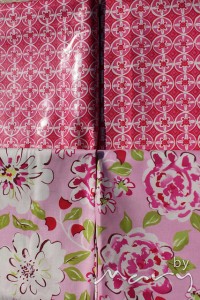 So, these are the fabrics we selected for the lunch bag, Tea Garden by Dena for Free Spirit,the top print is Oolong and the bottom is Ying Ming both in the fuschia colour way.  We bought both laminate and unlaminated/normal.

Then I made a lunch bag, I used this pattern by Virginia (visit her blog to see all the lovely things she makes for children).  Bethan was keen to watch me cut but when joined by her little brother and sister I did find it hard to concentrate.  Anyway in fits and starts over the last day or so I made it and Bethan was delighted to see it this morning.

We took some photo’s in the garden but as the weather is so gorgeous it was almost too bright and Bethan whilst grinning her head off was squinting like mad! 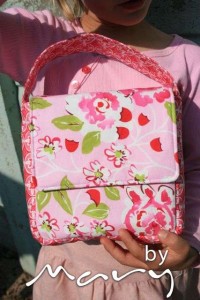 The pattern is great, the corners were tricky but she is one happy girl, asking if she could have a packed lunch today even though she’s on school holidays!

The other fabrics I bought… 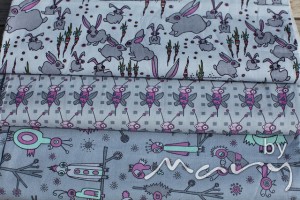 These three by Jay McCarroll from his Garden Friends range, the dress I made a couple of weeks ago for my niece was from this range and this colour way is fantastic, think I like it even more than the pink! 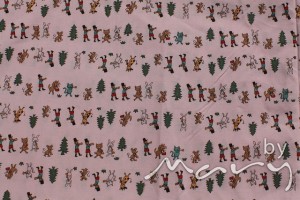 This is a pretty small print but in my mind unusual and very cute. 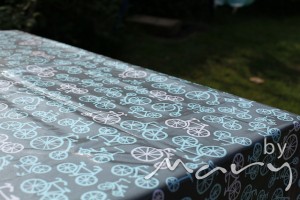 This is the only picture that Tobi took of this one, it’s another laminate, Bicycles by Michael Miller, I liked it when I ordered it but it has really grown on me and I’ve got lots of ideas of what I could use it for including a raincoat for my little boy!

Last week I whizzed up a pair of shorts for Bethan as she discovered that she’d grown out of last summers pairs and it was hot.  My mum had passed on some old dresses which I’d put in the loft and then spotted them and thought they had lots of potential.  So no photo’s of that pair yet but she was impressed and of course little sister now wanted a pair so I cut two more pairs out last week and left them on the table ready for sewing but also needing to buy elastic for them.  We took a trip into town yesterday and bought the elastic so today I made the most of a sunny day and not a lot to do and sewed them up.  I do try to be disciplined so I made a deal with myself and cooked dinner first thing, therefore allowing the rest of the day to ‘watch’ the children and sew. 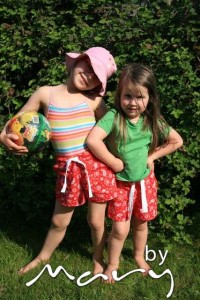 Their imaginations are fairly wild at the best of times, this afternoon they ran a cafe in the garden serving pea soup, lamb casserole and pasta and pesto!  However once the shorts were finished they became Reuben and Dan (you know who you are) playing a game of football, fortunately for me the football stars found time for a quick photo-shoot (and then the camera battery went dead and the card was full!).  The fabric you may recognise, I made their play canopy with it and had lots left over from which I made a pillowcase for Dress a Girl and there are still plenty more pieces spare!  We may have to be careful that they don’t become camoflaged in the garden against the canopy!

Must get on Tobi is out until very late so my plan was to make a start on the top secret present that Bethan and I are working on for his birthday – not sure how long it will be top secret as Bethan is desperate to tell him about it!